Hitman does a Superman! 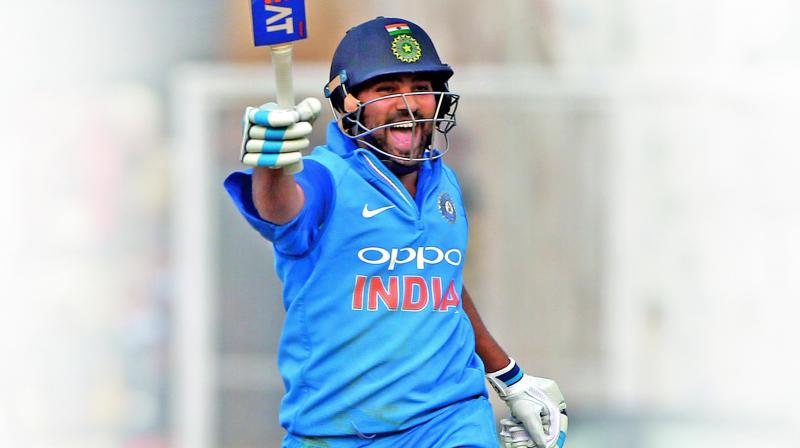 Mohali: Skipper Rohit Sharma rose to the occasion when it mattered the most as his record-setting third double hundred guided India to a series-levelling 141-run win against Sri Lanka in the second one-dayer here on Wednesday.

Rohit smashed an unbeaten 208 off 153 balls to fire India to a mammoth 392/4, a total that proved to be too much for Sri Lanka as the visitors ended at 251/8 with Angelo Mathews' unbeaten 111 going in-vain. While Rohit stole the show with another sensational knock, Shikhar Dhawan (68 off 67) and rookie Shreyas Iyer (88 off 70) played the supporting role to perfection.

India virtually batted Sri Lanka out of the game by posting the highest-total at this ground, surpassing the 351/5 South Africa made against the Netherlands in 2011.

It was not the only record that was shattered on a day when India were under pressure to perform after the debacle in Dharamsala.

Rohit, captaining the side in his first full series, singlehandedly won the game for India with an innings that comprised as many as a dozen sixes and 13 fours. After completing his first 100 runs off 115 balls, the stylish opener was simply unstoppable, blasting the next 100 runs off 36 balls to complete a famous double ton in the 50th over of the innings.

His last double hundred, 264 at the Eden Gardens three years ago, had also come against Sri Lanka while the maiden one (209)  was recorded against Australia at Bengaluru in 2013.

Sachin Tendulkar, Virender Sehwag, Chris Gayle and Martin Guptill are the others who have breached the 200-run mark in 50-over cricket. 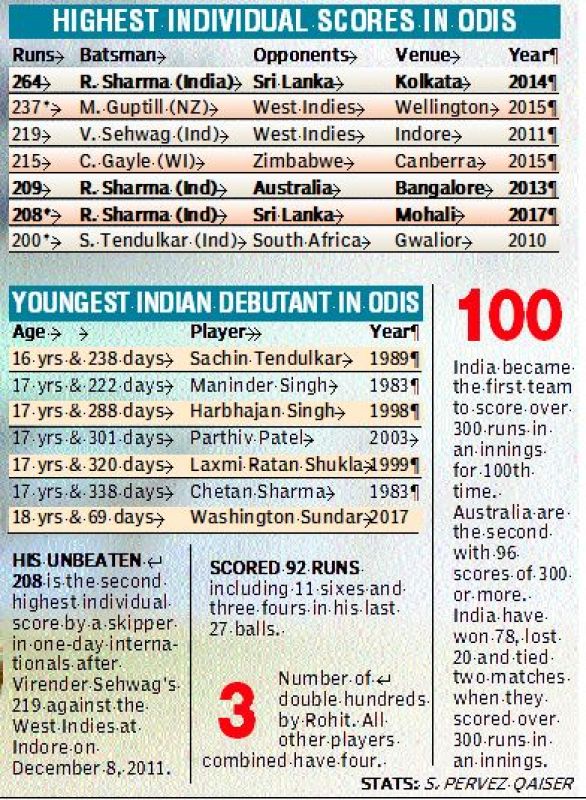 However, the Rohit special came on a batting beauty, two days after Indian batsmen failed miserably against the moving ball in Dharamsala.

Sri Lanka pacers were on the money in the series opener but they put up a performance they would like to forget sooner than later. They offered too many freebies including lead pacer Suranga Lakmal who had an off day leaking 71 runs in eight overs.

The other pacers, captain Thisara Perera (3/80) and Nuwan Pradeep (0/106), too were guilty of bowling too many low full tosses and half trackers, making the job easier for Rohit and Co.

Though Rohit ran amok in the death overs, he took time early on. It was Dhawan who attacked the opposition bowlers initially before the dangerous opening duo completed their 12th century stand to lay the foundation for a big total. En route to his double hundred, Rohit crossed the 100-run mark in ODIs for the 16th time in his career, sixth this year and first as captain.