Dhoni has made 15 dismissals from three Test matches, while Dinesh Karthik has 12, followed by Bangladesh’s Mushfiqur Rahim (11). 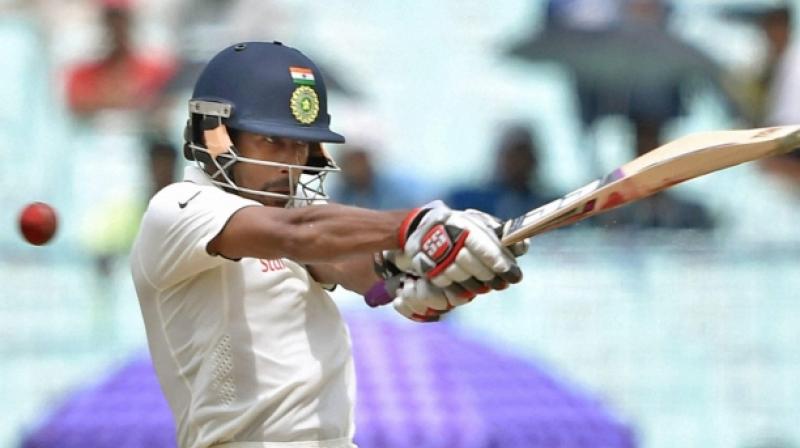 After having missed the third Test match during the recently concluded series, which India won 3-0, Wriddhiman Saha will be again making his return to the playing XI, as India lock horns with Bangladesh in a two-match Test series. (Photo:PTI)

Mumbai: After having missed the third Test match during the recently concluded series, which India won 3-0, Wriddhiman Saha will be again making his return to the playing XI, as India lock horns with Bangladesh in a two-match Test series.

Saha, will be looking to enter an elite list, when India’s World Test Championship (WTC) campaigns resumes against Bangladesh. After making a successful comeback to the Test side following his injury, will be looking to break Mahendra Singh Dhoni’s record of most wicket-keeper dismissals.

Dhoni has made 15 dismissals from three Test matches, while Dinesh Karthik has 12, followed by Bangladesh’s Mushfiqur Rahim (11). However, Rahim is slated to leave his role in order to prolong his international career. Hence, Rahim’s decision to leave the keeping duties will pave the way for Saha to leapfrog Dhoni in the elite chart.

Saha, who made a successful comeback into the Indian team after being sidelined for nearly two years, due to injury, has justified his selection by grabbing in-human catches behind the stumps. Recently, the specialist wicket-keeper took a stunner to dismiss South Africa’s Theunis de Bruyn in the concluded Test series.

Following the Bengal cricketer’s stunning catch, Virat Kohli hailed him as the best wicketkeeper in the world. Describing about his catch, Saha in an interview with the Hindustan Times had said “It was a good catch. And this is definitely a great phase. I really appreciate whatever Virat has said about me. I made a comeback, we won the series 3-0 and now I’m expecting a second child (due next year).”