SA won the series-opener by 177 runs in Perth and are pushing to clinch the three-Test series with an innings victory at Bellerive. 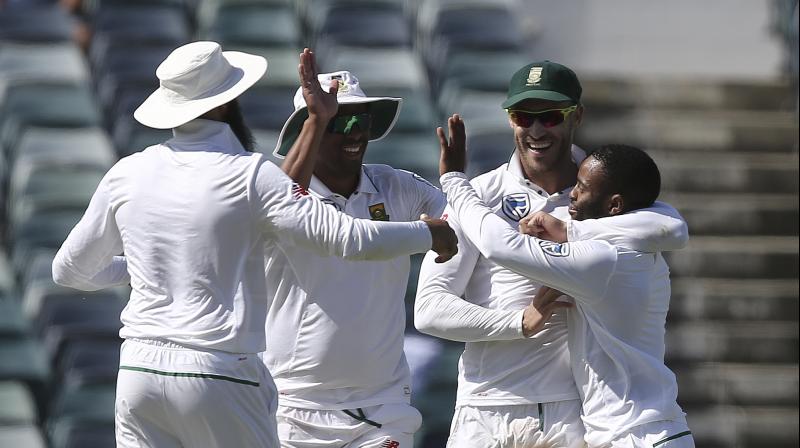 Hobart: South Africa are closing in on a second Test victory against Australia, needing eight more wickets against a batting lineup bereft of form and confidence to clinch a series victory with a game to spare.

When bad light forced early stumps on day three, Australia was 121-2 in its second innings, with Usman Khawaja unbeaten on 56 and skipper Steve Smith – who top-scored with an unbeaten 48 in Australia's calamitous first innings of 85 – batting on 18.

Australia's chances of avoiding defeat took a significant setback when opener Joe Burns was out for a four-ball duck, feathering an innocuous delivery from Kyle Abbott down leg-side for wicketkeeper de Kock. Australia was 0-1 in the first over.

There was an immediate rain delay after Burns' departure, but upon resumption David Warner and Khawaja lifted the total to 79 before Warner's luck ran out.

The free-hitting opener was out for 45 when he tried to flick an Abbott delivery on the legside, but the ball hit his hip, and ricocheted off his elbow and onto leg stump.

Khawaja got a reprieve with Australia at 93-2 when South Africa referred an lbw decision against him but the original not out decision stood. Australia need a big partnership between Khawaja and Smith – or more intervention from the Hobart weather – if the home side is to stay alive in the series.

South Africa won the series-opener by 177 runs in Perth and are pushing to clinch the three-Test series with an innings victory at Bellerive.

Rain prevented any play on Sunday following an extraordinary opening day in which 15 wickets fell as South Africa reached 171-5.

De Kock resumed day three on 28 and became just the fifth South African to score half centuries in five consecutive Test innings before reaching his second Test hundred from 139 balls.

De Kock was in command in cold, overcast conditions, stroking 17 boundaries and appearing untroubled until he took on a Josh Hazlewood (6-89) ball that moved off the seam and took out his stumps.

That gave Australia a glimmer of hope by exposing the tail.

Joe Mennie struck immediately after the lunch break to remove Bavuma as South Africa slipped to 292-7. Hazlewood wrapped up the tail, bowling Keshav Maharaj (1), trapping Abbott (3) lbw and getting Vernon Philander (32) caught behind to return 6-89.

"Everyone knows we need to improve and improve quickly," Hazlewood said, responding to heavy criticism of Australia's form after four consecutive Test losses. "We're obviously a pretty tight group. ... It's an important time to stick together and even be tighter."