The first ODI was abandoned due to rain whereas, in the second ODI, the Men in Blue came out triumphant. 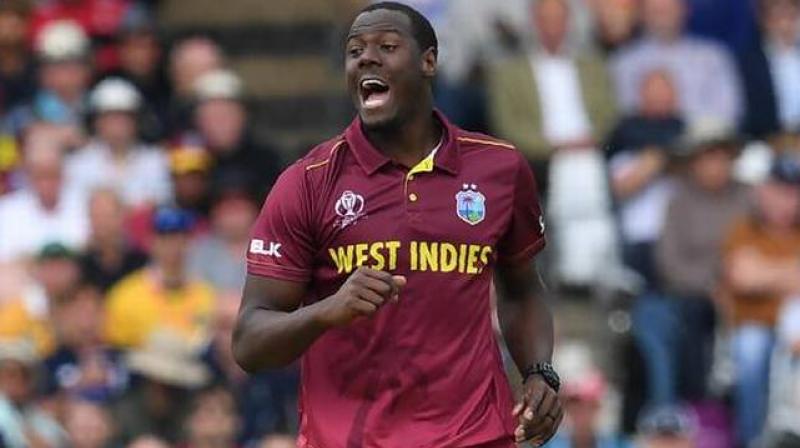 The 31-year-old Brathwaite said that the team has the belief to win matches, but the side has been unable to execute that belief on the field. (Photo: AFP)

Port of Spain: As West Indies and India get ready to face each other in the final ODI of the three-match series, Windies all-rounder Carlos Brathwaite said that the side is continuing to miss the key points in matches, and the team needs to improve on that front to get positive results.

"I don't think we are that far away. We just continue to miss key points in the game. If we look back at the World Cup it is the same thing. If we look at the game the other day we weren't cruising, but we were in a good position, and then we lost three or four quick wickets," Brathwaite told reporters on the eve of third ODI.

In the second ODI of the three-match series, Windies had to chase 270 in 46 overs and the side was in a good position at 179/4, but successive wickets of Nicholas Pooran and Roston Chase derailed the chase, and in the end, they lost the match by 59 runs.

"We are just missing a few key moments that could have turned one or two loses into wins and make us look a little better, give us a little momentum, and start to try to win series more consistently," he added.

Brathwaite said that the side is in good spirits after having full-fledged practice sessions under their belt. He added that the side drew ODI series against the top-ranked ODI team England earlier this year.

He also opined that the batting order will need to step up to get the results in their favour.

"We drew the last series against England at home as well. And then going into the last game it is for us to get the batting in order. If we get good starts going into the back end that'll give us a good chance," Brathwaite said.

"I think the batting has much improved especially since the T20s and from the overall batting performance in the World Cup as well. But, we didn't close it off. We batted well in the second game as well, it was about closing it off. Hopefully, that happens in the next game as well and for the lower half to close the game," he added.

The 31-year-old Brathwaite said that the team has the belief to win matches, but the side has been unable to execute that belief on the field.

"So, I don't think it's a lack of belief or a lack of passion and in most cases it's not even a lack of skill, but just executing what we want to execute the key moments of the game, which was the case in majority of the World Cup and this series so far," he added.

Brathwaite was dismissed for a duck in the second ODI against India. He had earlier scored a century against New Zealand in the recently concluded World Cup.

"We are having a lot of honest conversations with the coaches and the staff and I think one thing that has kept me back is my fitness. I am working very, very hard in the past 12 to 14 months on my fitness. I believe I can get a bit stronger as well," Brathwaite said.

"I think batting-wise I have to reprogram my thinking in thinking about hitting and swiping and batting properly. I think there has been a conscious effort for me to try to help the team as a batsman and a bowler and try to give myself the best chance for the team and try to help West Indies win cricket games," he added.

India currently holds a 1-0 lead in the three-match series against West Indies. The first ODI was abandoned due to rain whereas, in the second ODI, the Men in Blue came out triumphant.