Smith has scored five centuries in his past six Ashes Tests, averaging 139. 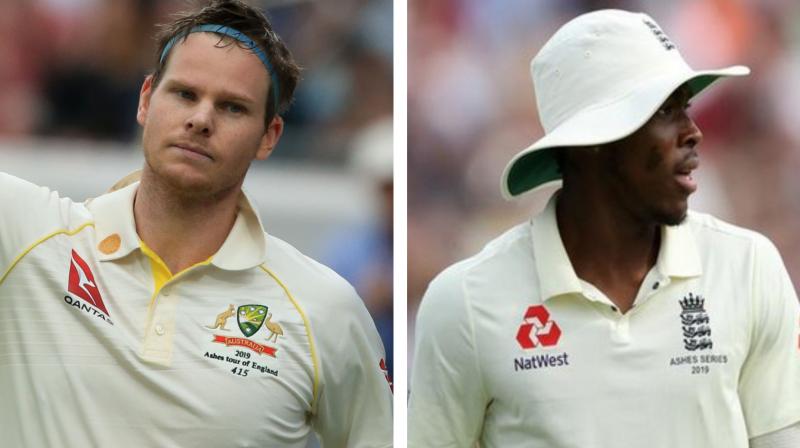 England are set give a Test debut at Lord's to World Cup-winning fast bowler Jofra Archer. Steve Smith returned to Test cricket following a 12-month ban for his role in a ball-tampering scandal with innings of 144 and 142 as Australia beat England by 251 runs in the Ashes opener at Edgbaston last week. (Photo:ANI/AFP)

Smith returned to Test cricket following a 12-month ban for his role in a ball-tampering scandal with innings of 144 and 142 as Australia beat England by 251 runs in the Ashes opener at Edgbaston last week.

Smith has scored five centuries in his past six Ashes Tests, averaging 139.

But former England captain Strauss, speaking to reporters at Lord's on Wednesday as rain washed out the first session of the second Test, insisted England were not up against a superhuman in Smith.

"If you look in that first innings, he played and missed a lot early on...I don't think it's a case of reinventing the wheel," he said.

"He played brilliantly, fantastically well. But he's going to nick one at some point.

"Bowlers have to be prepared to be patient."

James Anderson, England's all-time leading wicket-taker, broke down with a calf injury after bowling just four overs at Edgbaston and the Lancashire paceman won't now play in the second Test.

"I honestly believe James Anderson going off after four overs cost us the game and there's no blame apportioned to anyone because these things happen, but we had them 120 for 8, we had a 90-run lead (on first innings) and then we were without your best bowler.

"Over the course of the game that counts more and more."

England are set give a Test debut at Lord's to World Cup-winning fast bowler Jofra Archer and Strauss had high hopes for the Sussex quick.

"He's got pace, he's accurate, he's got good variety," said Strauss, an Ashes-winning captain in 2009 and 2010/11, "I think he's going to be a fantastic England bowler and have a long career, but he's potentially making his debut so we can't expect him to be the answer to all our prayers."

Strauss was speaking ahead of the inaugural Ruth Strauss day at Lord's, with the 'home of cricket' set to turn red in honour of the foundation that bears her name, which was set up after she died from a rare form of lung cancer in December.

Thursday's event echoes the annual 'pink Test' in Sydney, where the third day at the SCG sees the ground turn pink for the McGrath Foundation, established by Australia great Glenn McGrath following his wife Jane's death from breast cancer.

"I sat down and did a piece with him (McGrath) last week, I really enjoyed speaking to him about his experiences...I'm sure there's things we can do together in the future," Strauss said.

"On a personal level it's going to be an emotional day for me and the kids.

"But it's great to be here and sample it and get a feeling of how much support there is for the foundation and people who want to pay testament to Ruth."