West Indies bowler Sheldon Cottrell may have a special salute for England coach Trevor Bayliss, but Jofra Archer could rain on that day. 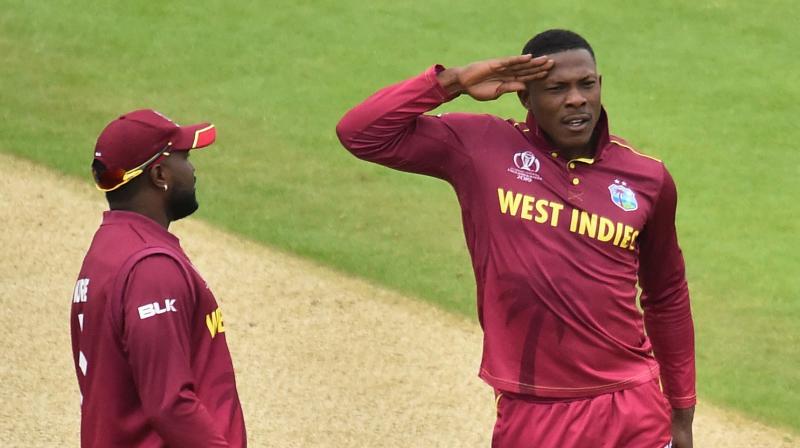 Sheldon Cottrell, whose flamboyant wicket-taking celebration involves a short march, stand to attention and salute to the pavilion, will meanwhile be doing his best to get on Bayliss’s nerves. (Photo: AFP)

Southampton: West Indies bowler Sheldon Cottrell may have a special salute for England coach Trevor Bayliss when the two sides meet in the World Cup on Friday, but Jofra Archer could rain on that particular parade.

The match will be his first against the country he was also eligible to play for and one that will give West Indies fans plenty of time to appreciate a talent that slipped through their fingers.

Cottrell, whose flamboyant wicket-taking celebration involves a short march, stand to attention and salute to the pavilion, will meanwhile be doing his best to get on Bayliss’s nerves.

The 56-year-old Australian told reporters on Wednesday that the ‘Sheldon Salute’ was enough to annoy anyone over the age of 40 and himself in particular.

“But every team has their way of celebrating and I’m sure other teams might not like the way we celebrate,” Bayliss said.

“In the end, it’s a young man’s game. It’s all entertainment. If it gets a bit of a laugh or a smile on people’s faces so be it,” he added.

West Indies captain Jason Holder was asked on Thursday whether Cottrell had “a nice, special salute” lined up for Bayliss, and he smiled.

“I don’t think it will change, that’s just Sheldon. I guess Trevor will just have learn to accept it,” he replied.

Watching the West Indies batsmen smashing Archer’s deliveries to the boundary might rank even higher on the satisfaction scale but Holder was keen to put the match into perspective.

“It’s something that has been talked up in the press, in the media, and we are looking forward to the challenge against England,” he said.

“I have seen Jofra over the years. He is obviously a Barbadian. He’s grown up in Barbados playing cricket so what I’m seeing of Jofra doesn’t surprise me. He is one of those guys who has always had ability and talent,” added the captain.

“It is just unfortunate how things went in terms of his decision-making but he is a good talent.”

The match, he emphasised, was against England, the pre-tournament favourites, and not just about one man.

Holder said the final team selection would be made on Friday, with all-rounder Andre Russell recovering well from a knee injury after being left out of the rain-abandoned match with South Africa.

“He is just one of those guys where we give him as much time as he possibly needs, so it all boils down to how he wakes up tomorrow morning and feels,” said the captain.