ICC CWC'19: 'Jofra won’t know how it feels until he plays the game': Eoin Morgan

The Barbados-born 24-year-old, whose father is English, was cleared to play for England under new eligibility rules. 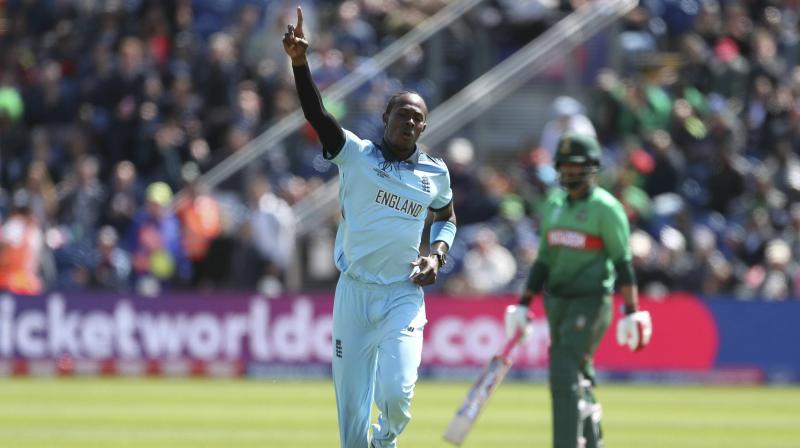 Jofra Archer once played for West Indies under-19s so there is likely to be some extra edge when he runs in against them at Southampton’s Rose Bowl on Friday. (Photo: AP)

London: England captain Eoin Morgan is relieved to have fast bowler Jofra Archer at his disposal for Friday’s World Cup clash against West Indies rather than having to face his pace.

The Barbados-born 24-year-old, whose father is English, was cleared to play for England under new eligibility rules which meant he needed three years residency, rather then seven.

He has grabbed his opportunity with both hands, taking three wickets for 27 runs in England’s opening World Cup win over South Africa and then took another three-wicket haul against Bangladesh, having gone wicket-less in the loss to Pakistan.

Archer once played for West Indies under-19s so there is likely to be some extra edge when he runs in against them at Southampton’s Rose Bowl on Friday.

“It is great that he’s in an England shirt at the moment,” Morgan told a news conference.

“Jofra’s been very consistent over a long period of time since he came to Sussex.”

Asked if it might be distracting playing against some of his former West Indies colleagues, Morgan recalled his own experiences having switched allegiance to England from Ireland.

“He won’t know how it will feel until he plays the game tomorrow,” Morgan said. “I think being in that position myself it does feel different the first time you play against a side that either you could have potentially played for or played for.

“But I’m sure he will handle it like he’s handled everything else so far. Every challenge he’s come up against so far he’s come out the other side really well. So let’s see how it goes.

“We are not expecting anything majorly different.”

Quality fast bowling has been a feature of the tournament so far with Pakistan’s Mohammad Amir leading the wicket-taking charts with 10, including five against Australia on Wednesday.

With Mark Wood a doubt with a swollen ankle, Archer’s pace will be key for England.

“You need one, if not two (quick bowlers),” Morgan said. “Even the game yesterday, Australia against Pakistan. The big impact was when (Mitchell) Starc came back at the end of the innings to take those wickets.

“Even when you go back to games that we played in the winter, big games, the big contributions all had to do with the fast bowlers.”