Kohli was very respectful of Bangladesh as an opposition despite India enjoying a great record against them. 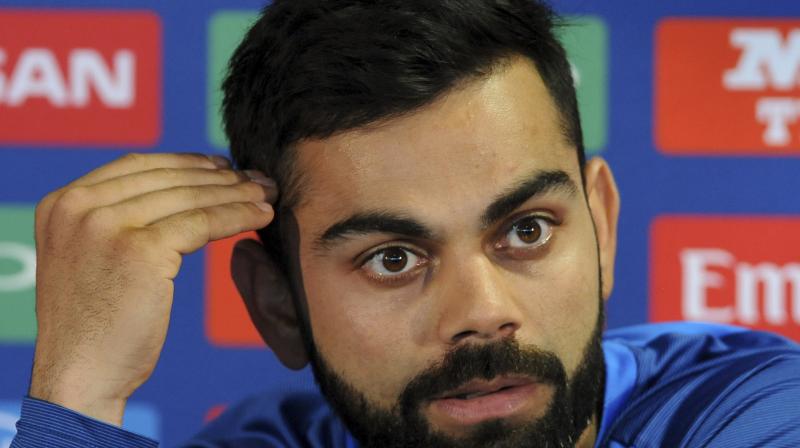 For the combative Indian captain, lack of batting time during matches would only spur Hardik Pandya and Kedar Jadhav to cash in and deliver whenever they are required.(Photo: AP)

Birmingham: Law of averages is one aspect in cricket that international teams are always wary of but Virat Kohli is not bothered one bit about what may happen if the famed and in-form Indian top-order flounders in the ICC Champions Trophy semi-final against Bangladesh. Asked if the lack of batting time for middle and lower order, after three successful league games, could pose problems, Kohli was dismissive.

"No, that's not a concern. Obviously, as a batsman you want to finish off games, so you are not necessarily going to get out thinking my middle-order hasn't got any game time.

"So, given an opportunity, everyone would like to finish games convincingly and, as I said everyone is batting well," Kohli said on the eve of the match here.

For the combative Indian captain, lack of batting time during matches would only spur Hardik Pandya and Kedar Jadhav to cash in and deliver whenever they are required.

"In the practice games, everyone has got a hit, and we know Kedar and Hardik are playing really well at the moment, so we are not bothered at all. Rather they (Kedar and Hardik) are looking for an opportunity if the team is in a bit of trouble.

"I am sure those two guys are going to step up and take the team through along with Ash (Ravichandran Ashwin) and Jaddu (Ravindra Jadeja) as well. Those guys are actually waiting for opportunities, and that's a great mindset to have.

"They are not sitting comfortably thinking 'oh these guys are going to do the job'. They are actually prepared if a crisis situation comes in  'we want to be the match winners' (that) is the energy they are creating," Kohli sounded confident.

Kohli and the current team has played a number of pressure games in ICC tournaments, but he said on a new day that will count for little.

"Yeah, we have played these kind of games before quite a few times but there are no guarantees in this sport. As we have seen in the league stages as well, a lot of teams have surprised the opposition, and we are certainly not taking anything for granted.

"We will use whatever momentum we have gained in this tournament to execute what we want to. We are not going to go according to past results and what we have done in the past tournaments. Going into a big game like this, we are going to treat it as how we treated the last game, and our mindset does not differ."

Kohli made it clear that an unchanged XI would take on Bangladesh and Umesh Yadav will be warming the bench.

"We gave a lot of people chances in the practice games and he (Umesh) did bowl well in that game but that does not mean that you necessarily play someone who has done well against a particular opposition in a practice game."

He was all praise for Ashwin's performance against South Africa.

"I think Ashwin was brilliant in the last game, and I don't see any good reason to change that. The team played really well. It was a complete performance, and I certainly don't think that there is any need to change anything."

Kohli was very respectful of Bangladesh as an opposition despite India enjoying a great record against them.

"It is no surprise anymore to anyone that they are doing really well, and they have really improved their cricket, and it is a credit to their set-up and the kind of players they have now who are taking more responsibility.

"Bangladesh is a very dangerous side on their day and everyone realises that. Bangladesh have taken huge strides. I mean they are in the top-eight sides in the world. So yeah, they are a very competitive side," Kohli side.

The one question that must have irritated him was the 2015 World Cup quarter-final controversy.

"It's been 24 months! I seriously don't think that anyone is thinking about that game. We have had so many matches against each other since then, and we are certainly not going out to prove a point to anyone.

"We just want to play good cricket as a side. Our opposition could be anyone. We are not really thinking about what's happened in the past or things that go on at the international level," Kohli said, setting the record straight.