India captain has promised there will be no let-up from the title-holders. 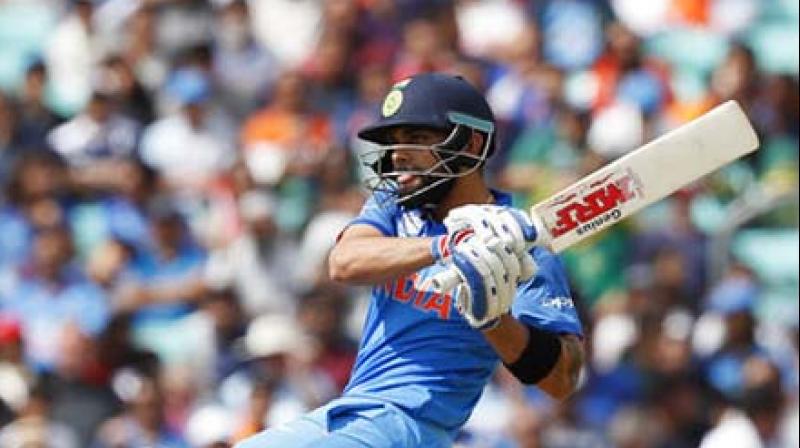 Birmingham: India captain Virat Kohli has promised there will be no let-up from the title-holders when they face Bangladesh in the semi-finals of the Champions Trophy at Edgbaston on Thursday.

After a surprise group defeat by Sri Lanka in a tournament featuring the world's top eight one-day international sides, India responded to their 'win or go home' clash against South Africa with a commanding eight-wicket victory over the top-ranked Proteas at the Oval last weekend.

India's bowlers put the brakes on South Africa's innings while a trio of run-outs said much about the Proteas' frailty and the improved fielding standards of Kohli's men.

Needing a mere 192 for victory, Kohli was there at the finish with 76 not out as India won with a whopping 12 overs to spare.

It was an innings that helped take the India skipper back to number one in the ICC ODI batting rankings.

Now India return to Edgbaston where they launched their title-defence with a 124-run thrashing of arch-rivals Pakistan.

"We played in Birmingham before. We like that pitch. It suits our game," said Kohli after the win over South Africa."There's no looking back. There's always room for improvement. We can't rest on your laurels

With Pakistan facing tournament hosts England in Wednesday's first semi-final in Cardiff, three of the four teams left in the tournament are all from the sub-continent.

Kohli acknowledged the amount of one-day cricket played in the region was a factor, but he has also been impressed with the way so many of the Asian nations have adapted to English conditions.

"Maybe because of how much limited-overs cricket we play, I think the players are getting more experienced in difficult situations," he said.

"Maybe some of the teams have really surprised the opposition with the way they have batted and bowled in certain situations."

There was certainly plenty of good work with the ball carried out by Bangladesh's bowlers as they held New Zealand to a modest 265 for eight in Cardiff last time out.

The Tigers were, however, still looking at an embarrassing defeat when they slumped to 33 for four in reply.

But Shakib Al Hasan (114) and Mahmudullah (102 not out) responded to the pressure of a dire position in a must-win game with a brilliant new Bangladesh record partnership of 224 that turned the match upside down and eventually saw New Zealand eliminated.

Bangladesh's place in the last four was then confirmed when England beat Australia at Edgbaston.

India have 26 of their 32 ODIs against Bangladesh, suffering just five defeats with one no result. But Bangladesh captain Mashrafe Mortaza believes wins such as the one over New Zealand will bolster the side's already growing self-belief.

"In the last three years we keep improving a lot," he said. "This sort of performance really help us to move forward, especially with the 2019 World Cup (in England) coming up."