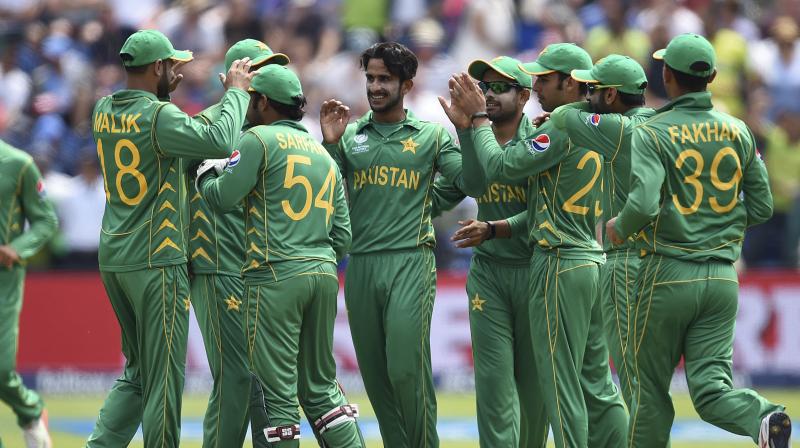 Sent in on a used pitch after Pakistan captain Sarfraz Ahmed won the toss, England found runs hard to come by, with no batsman making a fifty.(Photo: AP)

Cardiff: Hasan Ali took three wickets as Pakistan restricted England to 211 all out in their Champions Trophy semi-final at Cardiff on Wednesday.

Sent in on a used pitch after Pakistan captain Sarfraz Ahmed won the toss, England found runs hard to come by, with no batsman making a fifty.

Paceman Hasan returned excellent figures of three for 35 in 10 overs.

Such was Pakistan's control that usually big-hitting England all-rounder Ben Stokes's 34 took 64 balls and did not include a single boundary.

But the way Pakistan collapsed to 162 for seven chasing 237 in their virtual 'quarter-final' against Sri Lanka in Cardiff on Monday before winning by three wickets would have given England some hope at the mid-innings break.

Mohammad Amir, who made 28 not out Monday in an unbroken eighth-wicket stand of 75 with Pakistan captain Sarfraz Ahmed (61 not out) was missing from this match because of a back spasm.

Title-holders India play Bangladesh in Thursday's second semi-final at Birmingham's Edgbaston, with the final at the Oval in London on Sunday.