In IPL 2019, Shankar scored 219 runs in 14 matches and took only one wicket in an under-utilised bowling stint. 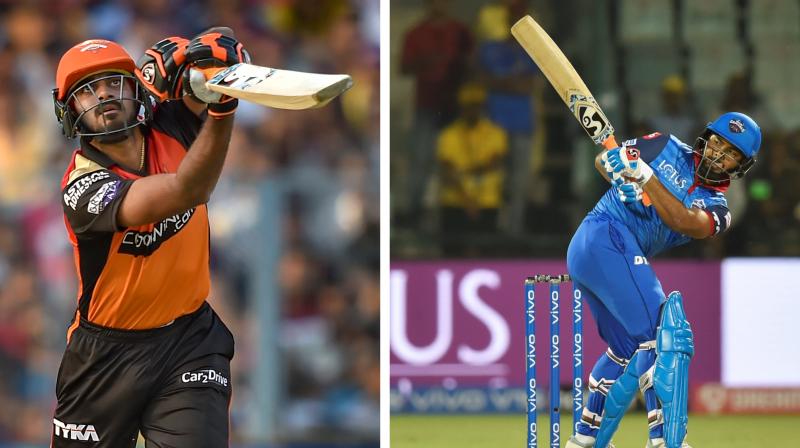 Shankar was selected for the World Cup 2019 due to his three-dimensional capabilities of batting, bowling and fielding. (Photo: PTI)

Mumbai: All-rounder Vijay Shankar’s entry into the Indian World Cup squad over in-form Rishabh Pant had raised quite a few eyebrows when the team was announced two weeks ago.

Naysayers may have a point today as Vijay Shankar’s performance in the recently-concluded Indian Premier League was pathetic. Shankar scored 219 runs in 14 matches and took only one wicket in an under-utilised bowling stint.

On the other hand, Pant scored 488 runs in 16 games for Delhi Capitals, with an average of 37.53. Relying on sixes in most of his innings, Pant holds the record for hitting most sixes for Delhi Capitals. He played a crucial role in propelling Delhi to the playoffs. Pant's blistering knock of 49 runs off 21 balls helped Delhi Capitals to advance to Qualifier 2 by beating Sunrisers Hyderabad in the Eliminator.

Shankar was selected for the World Cup 2019 due to his three-dimensional capabilities of batting, bowling and fielding. But Shankar failed to live up to the expectations of SRH fans.

The Orange Army was hoping to see him contribute in all three departments, especially after he sealed his berth for the World Cup 2019. His recent performances have put the cricketing fraternity in a dilemma about his inclusion in the squad over Rishabh Pant. Even if Shankar was chosen on the basis of his all-round capabilities, it would be futile to have him in the starting line-up if he fails to deliver in England.

Dinesh Karthik certainly is in contention to replace Shankar for the number four spot in the batting line-up, but Rishabh Pant’s recent form has made the selectors suspect their decision. Rishabh Pant has showcased his ability of single-handedly winning matches for Delhi Capitals in the current IPL season.

Vijay Shankar may help to strengthen India’s bowling attack in seaming condition of England. However, Hardik Pandya is in sensational form and is bound to overshadow Shankar in World Cup 2019.

The main adversaries for Shankar for the number-four spot will be K L Rahul and Dinesh Karthik. Both the batsmen outclassed Shankar in the IPL 2019 and will definitely get the preference ahead of Shankar. Shankar has the gift timing the ball with precision but lacks the aerial ability to clear the ball over the stands.

Hence, Shankar’s bowling will be the only way by which he can salvage himself. The medium pacer has to deliver on England’s pitches in order to secure his place in the starting eleven. The all-rounder will have to fight over the next two months for booking a fixed spot in the Indian team.

The World Cup 2019 will act as a sword looming over Shankar’s head, and the tournament will decide his fate. If he fails to prove his mettle in the mega-event, he will go down the history will the tag of—the player who faced four dot balls in the final of Nidahas Trophy.