Rajput feels that the team has been able to retain the core group which has made them very strong. 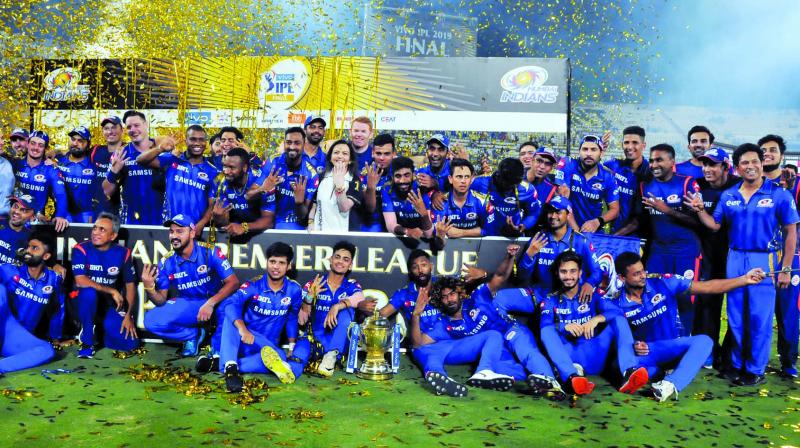 A jubilant Mumbai Indians pose with the IPL trophy after defeating Chennai Super Kings in the final in Hyderabad. (Photo: P.Surendra)

The former Mumbai Indians’ coach credits famous support staff for their inputs and praises Bumrah, Hardik for consistency. Lauds Malinga for showing his class in the last ball.

Mumbai Indians have been trolled often for having too many big names in the support staff, but it has clicked for them as they have won the title record four times after thrilling one-run win over Chennai Super Kings in the IPL-12 final in Hyderabad on Sunday.

There have been too many big names in the Mumbai Indians camp such as Mahela Jayawardene as the head coach, Shane Bond as the bowling coach, Robin Singh as the batting coach, previously Jonty Rhodes as the fielding coach and now James Pamment and the presence of stalwarts like Sachin Tendulkar (as mentor) and Zaheer Khan (Director of Cricket Operations) and the likes of John Wright and Kiran More as talent scouts.

“That’s why they have been successful, (without them) they would not have won four times in the last ten years. They have got the owners backing them, and the support staff is giving them every thing required,” reasons former Test cricketer Lalchand Rajput, who had been the coach of the MI franchise in the inaugural edition in 2008.

The legendary brains have helped Mumbai Indians produce brighter talents every year and groom them masterly. The rise of Jasprit Bumrah, Pandya brothers (Hardik and Krunal) and Rahul Chahar this year has been credited to the franchise.

Rajput feels that the team has been able to retain the core group which has made them very strong. The most successful IPL bowler Lasith Malinga has been there from the start barring last season, and Kieron Pollard has been playing match-winning knocks off and on since 2010. Skipper Rohit Sharma has been there since 2011 and took over captaincy midway in 2013. Hardik and Krunal have been there for five seasons now. Suryakumar Yadav has been consistent for them since last year, and this season they had a new find in Chahar and newcomer Quinton de Kock did the job for them at the top.

“Their core group is very strong. They are not losing too many players that makes them lethal,” Rajput feels.

Bowling has always been the strength of Mumbai Indians from the beginning. Despite losing Alzarri Joseph (injured) and Jason Behrendorff (for national duty) midway through the tournament, Lasith Malinga and Bumrah put their hands up to do the job for their franchise.

Bumrah was the pick of their bowlers with 19 wickets and economy below seven. Chahar was hard to get away in the mid overs and ended up with economy rate of below seven like Bumrah, also taking 13 wickets in as many matches. The leggie improved with every game and showed his talent in the Qualifier 1 and in final against experienced CSK side.

Malinga had an off tournament by his standards going around ten runs per over, but he picked 16 wickets and the crucial one in the last ball of the final. Hardik and Krunal also chipped in with 14 and 12 wickets to prove their utility as allrounders.

“Chahar was exceptional throughout the tournament and his contribution in the final was superb. He and Hardik were the consistent performers and Bumrah was bowling well throughout the tournament. Malinga showed his quality of being among leading bowlers in the IPL and seasoned campaigner. In the earlier over, he went for 20 runs and came back strongly to defend nine runs in last over,” he said.

Bumrah was the only MI bowler to feature among top five wicket takers in this season of IPL, showing their bowling strength. Rohit didn’t have the best of seasons with the bat, but he still managed 405 runs in the tournament. Suryakumar (424) and Hardik (402) were also relatively consistent but De Kock was their standout performer with the bat, scoring 529 runs and figuring among top three scorers in this IPL.

“Rohit was not that consistent with the bat, but he should open, he is a fantastic player. His captaincy has gone from strength to strength,” Rajput says.

“It was a total team effort and important thing was they were playing as one unit. No one performed every game. Someone stood up to play few match winning knocks and every one put their hand up to take the responsibility,” he added.