MS Dhoni becomes the most tweeted player in IPL 2019

The golden tweet of IPL 2019 was of all-rounder Hardik Pandya who had lauded MS Dhoni in his tweet by calling him a source of inspiration. 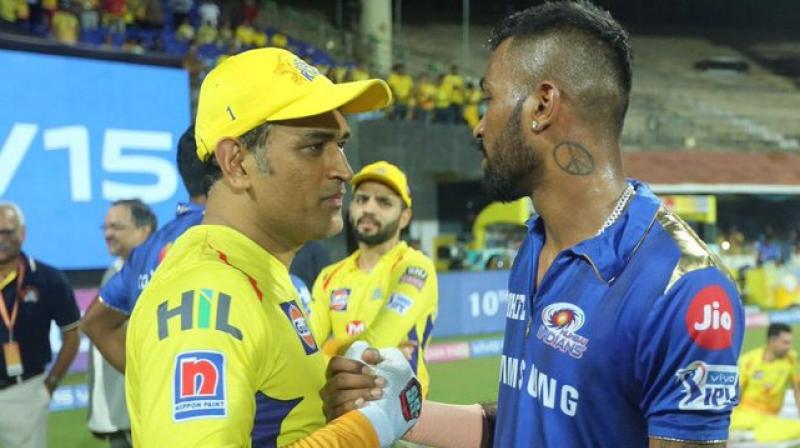 The twelfth season of IPL gathered a lot of interest from all the fans on social media. (Photo: Hardik Pandya/Twitter)

Chennai's innings was guided by Shane Watson's knock of 80 runs in 59 balls. CSK needed nine runs in the final over. But Lasith Malinga was successful in restricting the Yellows to 148 runs, helping Mumbai to win the match and the trophy by a single run.

The twelfth season of IPL gathered a lot of interest from all the fans on social media. Cricket fanatics set twitter on fire as the world record-breaking tweets regarding IPL.

The golden tweet of IPL 2019 was of all-rounder Hardik Pandya who had lauded MS Dhoni in his tweet by calling him a source of inspiration. The tweet set the twitter on fire by receiving nearly 16k retweets.

My inspiration, my friend, my brother, my legend ❤🚁 @msdhoni pic.twitter.com/yBu0HEiPJw

However, it was Chennai who became the most tweeted about the team on Twitter. Dhoni was the most tweeted player of IPL 2019, followed by Virat Kohli, Rohit Sharma, Harbhajan Singh and Andre Russell.

As per a report by India.com, this year’s IPL also saw a growth in video clips which were tweeted on the platform. The IPL Twitter handle tweeted out 130 per cent more video tweets compared to the last year’s IPL.

Manish Maheshwari, the Managing Director of Twitter India expressed his feelings by stating, “Fans love tweeting about cricket and this year we saw a record-breaking 27 million tweets around the IPL 2019 season. Twitter is the best way to see what’s happening in the world of sports and to talk about it, so we’re thrilled to see this incredible growth in IPL conversations this year.”