How did India World Cuppers do in IPL 12?

The analysis is important to justify the selection of the 15-member squad to determine if players are ready to have a go at the World Cup. 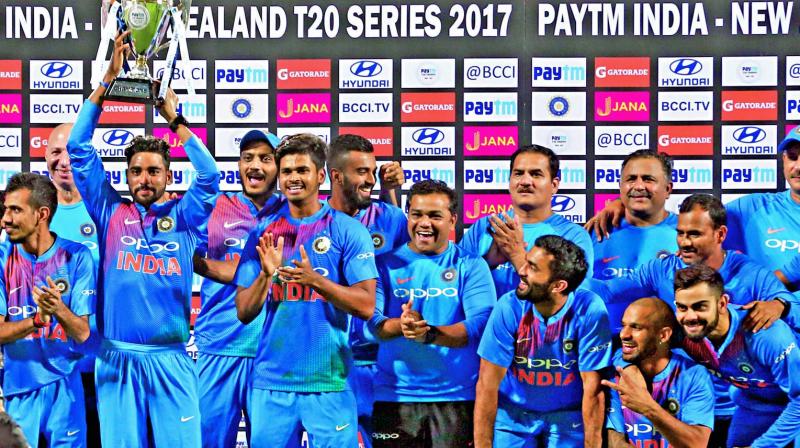 Before the men in blues head for the England and Wales based tournament, it’s high time we started looking at the 15-member players who featured in the IPL, and analyse how they fared in the men’s t20 league. (Photo: PTI)

Mumbai: With the end of the Indian Premier League 2019, the Indian cricket team turns its attention to the World Cup – the mega piece event that starts from May 30.  Before the men in blues head for the England and Wales based tournament, it’s high time we started looking at the 15-member players who featured in the IPL, and analyse how they fared in the men’s t20 league.

The analysis is important to justify the selection of the 15-member squad to determine if players are ready to have a go at the World Cup.

1)            Rohit Sharma: Though the Mumbai Indians captain claimed the fourth title but, as a batsman, the MI captain did not have a decent tournament. Rohit only managed to score two 50s and that too in the second half of the tournament. The vice captain of India scored 405 runs at an average of 28.92. This performance is below par compared to the number of matches he has played.

2.)           Shikhar Dhawan: Despite making a slow start, the Delhi Capitals’ opener changed fortunes for himself as well as for his team after he registered 521 runs with an average of 34.73.

Dhawan struck form at the most crucial point of IPL i.e during the second half of the cricket league. The 521 runs he made included 64 fours is the highest number of boundaries to have been scored by any batsman in this edition of IPL.

4.)           Virat Kohli: For Kohli, this edition of IPL was again forgettable. Kohli managed to score one century. Though Kohli did strike form, it was too late to make an impact on the tournament. His scored 464 runs in 14 innings.

5.)           Mahendra Singh Dhoni: If we are about to credit Chennai Super Kings for making to the play-offs, we would credit their strong leader, Mahendra Singh Dhoni. Dhoni alone picked up 416 runs in his 12 matches at an impeccable average of 83.20.  Moreover, on the field, he had five stumpings, and 11 catches.

6.)           Kedar Jadhav: Besides Kohli, Kedar Jadhav would be another person who didn’t have a great season. In his 14 matches, Kedar notched up only 162 runs, but unfortunately he sustained shoulder injury while fielding versus Kings XI Punjab, ruling him out of the remaining edition.

7.)           Dinesh Karthik: The Kolkata Knight Riders skipper had a dismal season in this year’s IPL as he gathered only 253 runs after 14 innings, and those 14 innings featured just two fifties. Despite his lack-lustre performance, Karthik was lucky to get selected in the World Cup due to his experience.

8.)           Hardik Pandya: Hardik Pandya desperately wanted to shut up his critics especially after he made misogynistic comments in the Koffee with Karan show. The governing body of Indian cricket, BCCI, suspended Pandya, and K L Rahul for nearly two weeks.

And as soon as the suspension was lifted, Hardik uplifted his game. Pandya was raring to go as soon as the Indian Premier League got started, and that was imminent as he plucked 402 runs with a strike rate of 191.42.  Along with that he scalped 14 wickets when his team needed the most.

9.)           Vijay Shankar: Vijay Shankar’s inclusion in the team ahead of Rishabh Pant had raised eyebrows. However for him the IPL season didn’t go as planned as he scored only 244 runs in 14 matches, along with a few wicket scalps.

11.)        Kuldeep Yadav:  Kuldeep Yadav, the chinaman (slow left-handed spinner), was desperate to erase the memory of getting smacked by Moeen Ali all over the park. But Yadav did not have much impact.

12.)        Yuzvendra Chahal: As compared to his spin partner Kuldeep, Chahal did make a good impact as he trapped 18 wickets out of the 14 matches that he played, and that too with an average of 21.44.

13.)        Bhuvneshwar Kumar:  Indian pacer, Bhuvneshwar Kumar too didn’t make much of an impact in his 15 matches. He scalped just 13 wickets at an economy rate of 8, and that is not the kind of performance that was expected from him.

14.)        Mohammed Shami: Just like K L Rahul ran out of partners, Shami plucked wickets while on the side his partner leaked runs. Shami fetched 19 wickets in his 14 matches, and he gave his best when his team needed the most.

15.)        Jasprit Bumrah: Experts have already started calling him out as the world’s current best bowler, and they’ve rightly said so. Jasprit picked up 19 wickets with an amazing economy rate of 6.63, and he scalped those wickets in 16 matches.