IPL 2019: RCB looks to register their second win against an inconsistent MI side

After a string of losses fifties by skipper Virat Kohli and ever-reliable Ab De Villiers, helped RCB register their 1st win of the season. 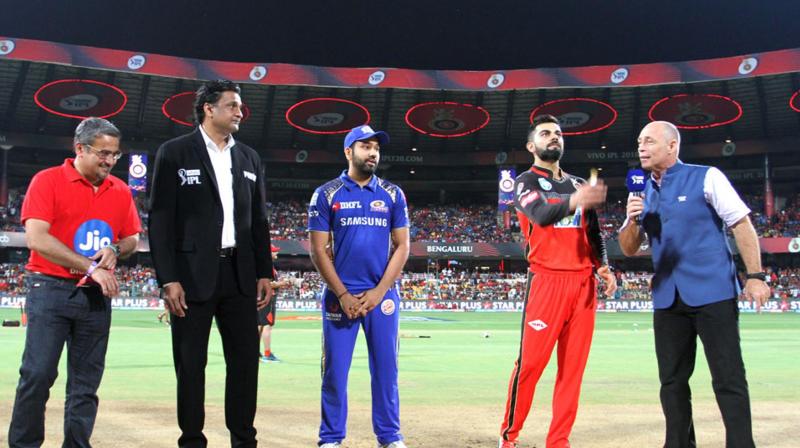 Despite the win against KXIP, RCB remain at the bottom of the points table and remain to win all their remaining league games to have any hopes of progressing in the tournament. (Photo: BCCI)

Mumbai: Fresh from a much awaited victory, Royal Challengers Bangalore will be aiming to maintain winning momentum and spoil Mumbai Indians' party when the two sides face-off in the Indian Premier League here Monday.

After a string of losses where nothing worked in their favour, fifties by skipper Virat Kohli and ever-reliable Ab de Villiers, helped RCB register their maiden win of the season on Saturday night.

The team is heavily reliant on Kohli and de Villiers and both would be keen to recreate their magic in front of a capacity crowd in Mumbai, on a day when the Indian team for the upcoming World Cup is scheduled to be picked.

Despite the win against KXIP, RCB remain at the bottom of the points table and remain to win all their remaining league games to have any hopes of progressing in the tournament.

Despite his father being in the ICU, Patel has shown commitment and amassed 191 runs in seven games.

On the bowling front, RCB's biggest asset has been Yuzvendra Chahal, who is the second on the most wickets list with 11 scalps. Chahal would be key player on a slow Wankhede track and has the potential to dismantle Mumbai's strong batting line up.

But he would need support from Mohammed Siraj (6 wickets), Navdeep Saini (4 wickets), Moeen (3 wickets) and a profligate Umesh Yadav (2 wickets). The arrival of veteran South Africa pace Dale Steyn is also a massive boost for RCB.

On the other hand, after suffering a four wicket loss against Rajasthan Royals, Mumbai would be aiming to get back to winning ways.

The good sign for them is that skipper Rohit Sharma (165 runs), who made a comeback after missing out a game due to injury and South African Quinton De Kock (238 runs), have got runs under their belt along with Hardik Pandya.

The bowlers would want to forget the hammering by Englishman Jos Buttler and come up fresh.

Also a word on West Indian pacer Alzarri Joseph, who sustained a shoulder injury while fielding in the last game, is awaited from the team management.