IPL 2018, KKR vs SRH: Williamson leads from the front as SRH continue dominance 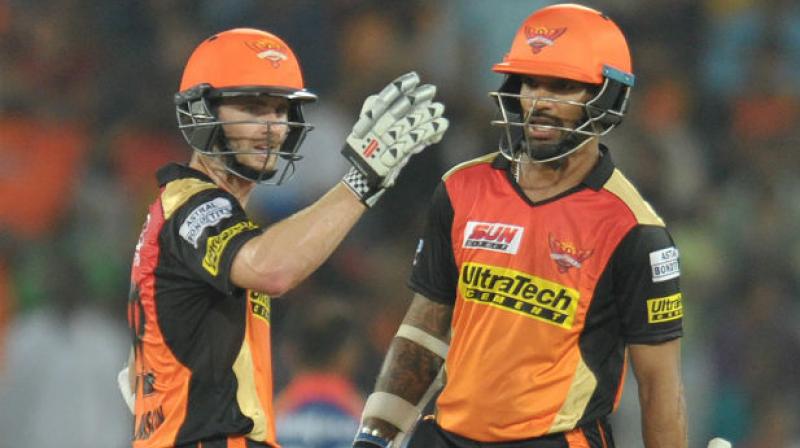 Earlier in the first innings, Bhuvneshwar Kumar starred as the visitors restricted Dinesh Karthik and co to 138-8. And they continued the momemtum in the second half to clinch their third victory of the season.

Wriddhiman Saha delivered an explosive start for the Sunrisers but the hosts bounced back through spinners Sunil Narine and Kuldeep Yadav as they claimed three quick wickets.

Later on, Kane Williamson and Shakib Al Hasan steered the innings with a crucial 69-run stand. The men in purple dismissed the duo soon but by then things had already slipped out of their hands.

A solid victory for the @SunRisers as they beat #KKR by 5 wickets at the Eden Gardens.#KKRvSRH #VIVOIPL pic.twitter.com/uoa81zEJxd

CAUGHT! Big wicket but is it too late now? Good length delivery and Williamson flicks it towards the man at square leg moments after bringing up his fifty.

WICKET! Shakib charges down the track but is cramped for room by Chawla. Ball deflects of the pads before disrupting the bails.

WICKET! And the finger goes up right away. Kuldeep tosses it up and the ball pitches in line before striking Pandey on the knee roll.

BOWLED HIM! And it's Narine again. Fullish delivery and Dhawan looks to tuck it away but is too late into his shot. Through the gates and he's out.

After electing to bowl first, Sunrisers Hyderabad dished out a clinical performance as they restricted the Kolkata Knight Riders to 138-8 at the Eden Gardens on Saturday.

The hosts lost Robin Uthappa early on but Chris Lynn continued to smack hard at the top. But after the showers interrupted play, the men in purple failed to carry on the same momentum they had shown in the powerplay.

Sunrisers bounced back with wickets at regular intervals and never let the opposition to build any sort of partnership. Bhuvneshwar Kumar was the chief wrecker with three wickets while Billy Stanlake and Shakib Al Hasan shared two each. Siddharth Kaul also claimed a wicket.

In how many overs you reckon will the #SRH boys chase this down? pic.twitter.com/bkgeB801Qy

WICKET! Siddharth Kaul finally claims a victim. Knuckle ball and Mavi has a go at it. The ball nicks the toe-end of the bat and Bhuvneshwar Kumar collects it well in time before a collision with Stanlake at short fine leg.

WICKET! Bhuvi's change of pace baffles Shubman Gill as he is caught at extra cover.

WICKET! And Stanlake gets the big fish. Russell look to go big, but gets a top edge which is collected by Manish Pandey.

WICKET! Pandey you beauty! Short and wide by Stanlake. Rana slashes hard at point and is caught.

Rain has stopped play at the Eden Gardens after Kolkata Knight Riders (KKR) were put to bat by Sunrisers Hyderabad (SRH).

Play at Kolkata has been suspended due to rain.#KKR are 52/1 in 7 overs. Stay tuned for further updates #KKRvSRH #VIVOIPL pic.twitter.com/rGdZjUICyf

WICKET! Bhuvi strikes and DRS confirms the wicket. Outside off, Uthappa looks to run it down third man but gets a fine edge.

Kolkata Knight Riders (KKR) will eye a comeback victory when they face Sunrisers Hyderabad (SRH) in an Indian Premier League (IPL) game at the Eden Gardens in Kolkata on Saturday.

Dinesh Karthik and co lost their previous match to Chennai Super Kings (CSK) away by five wickets in a thrilling encounter and a win will do them a world of good.

SRH meanwhile are riding high on confidence with two back to back victories under their belt and will aim to extend their dominance at the top of the IPL table.

Former KKR players Manish Pandey, Wriddhiman Saha, Yusuf Pathan and Shakib Al Hasan are now reunited at SRH and will aim to exploit the weakness of the opposition.

The two sides have faced each other 12 times, however, it’s the Shah Rukh Khan co-owned side that holds the upper hand with eight wins against their opponents.

Sunrisers have won the toss and elected to field.

Match 10 - @SunRisers win the toss and elect to bowl first against the @KKRiders at Eden Gardens#KKRvSRH pic.twitter.com/bRAvZy6Bew

Here's how the two teams line-up for today -

The match will take place at Eden Gardens, Kolkata