Satisfied I finished the game: Parkar

He and Dhumal didn’t panic but kept their cool even when the required rate was over 14. 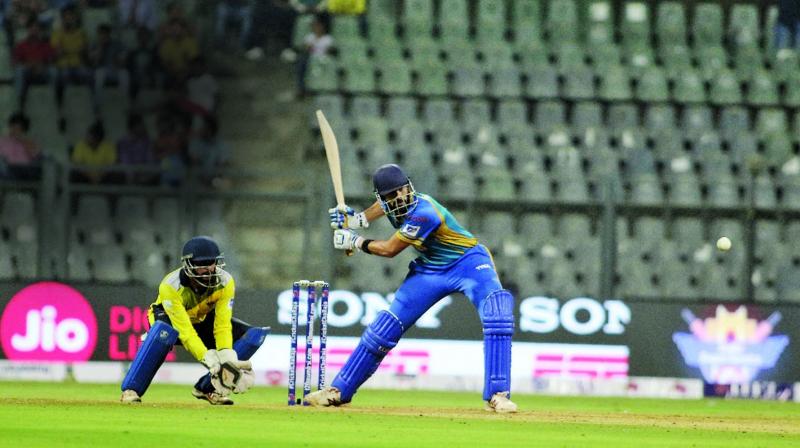 The breathtaking knock resulting in an unlikely win satisfied Parkar a great deal as he had produced such knocks before but could never finish the games.

Mumbai North East Triumph Knights pulled off an incredible chase at the Wankkhede stadium in their opening clash of the T20 Mumbai League. All-rounders Akash Parkar and Aditya Dhumal shared undefeated hundred-run partnership for the seventh wicket, to win by four wickets against the Abhishek Nayar-led Sobo Supersonics.

Chasing a stiff target of 185, Triumph Knights were reeling at 52 for 6 before Parkar (82 not out), who also shone with the ball (3/40), and Dhumal (50 not out) underlined the depth in the squad by snatching victory from the jaws of defeat.

Parkar hit five boundaries and six sixes in his 37-ball knock while Dhumal’s 50 came in 34 balls with a boundary and four sixes as the duo added 130 runs in just 65 balls to help their team start the tournament on a high.

Parkar, who made his debut for Mumbai earlier this season, didn't have much of an outing with the bat for though he has been among the wickets, including a five-wicket haul in the last Ranji Trophy League game against Tripura at the same venue. He showed his powerpacked batting, especially in the death overs but the strong allrounder would have liked this sort of innings before the Indian Premier League auction in January.

“It would have been good if the League was before the IPL auction but this performance will help me get better. I have performed in patches throughout the season. I want to improve and be more consistent,” he said.

Incidentally, the League was originally slated to take place in early January. Parkar, who has played for Mumbai in all formats earlier, now has to perform consistently to be in the reckoning for next year’s IPL or hope he gets an outside chance in IPL-11 as a replacement player.

The breathtaking knock resulting in an unlikely win satisfied Parkar a great deal as he had produced such knocks before but could never finish the games. He and Dhumal didn’t panic but kept their cool even when the required rate was over 14.

“I had played such knocks before but couldn’t finish games, this time I wanted to stay till the end and finish it. We tried to stay at the wicket till the 16th over as per instructions from mentor Lalchand Rajput and coach Atul Ranade and take it as close as we could. After the 16th over, we realised we can do it and went for the shots. Dhumal and I have been playing together since our U-14 days so the communication between us helped a lot in running between the wickets,” he said.

Parkar might have surprised all with the manner in which he made big hitting look ridiculously easy under pressure but he isn't immune to it.

“Hitting comes naturally to me though I had worked hard on power hitting in the five-six days of the training session,” he said.

The 23-year-old admitted that playing for Mumbai had instilled confidence in him. “This was my first Ranji season and playing with likes of Dhawal (Kulkarni), Suryakumar (Yadav) and Nayar helped me. They told me how to prepare for a match how to raise my game,” he said.

Incidentally, Parkar replaced Nayar in the Mumbai Ranji squad for the Tripura game, and Nayar leading Supersonics was at the receiving end of some brutal hitting by Parkar. But Parkar owes

Nayar a lot for his new found confidence. “I talk to Nayar a lot regarding my game and he has helped me a lot. When I was not getting a chance to play for Mumbai, he backed me. And when I was dropped after playing one game, he was the first to come and boost my confidence. I played with him for BPCL before and we are good friends," he said.

For Triumph Knights coach Atul Ranade, it was a first taste of franchise cricket and it was bitter when their six top order batsmen were back in the hut without contributing significantly. But to his pleasant surprise Akash Parkar and Aditya Dhumal had other ideas.

“I didn’t expect we would win after our top order rushed into their shots. It was a big task from there on with the required rate at 14 runs in the last nine overs. They (Parkar and Dhumal) did it because of their self-belief. It was a beautiful surprise in the end that lifted spirits in the dressing room,” Triumph Knights coach Ranade said.

“Me and (mentor) Lalchand Rajput told them to be patient till the 15th over and they did exactly that. A good start to the tournament was important and thanks to them we could achieve it. Most of our players are all rounders and it is a of sorts boon for us,” he added.