MS Dhoni in love with Chennai

Chennai Super Kings is planning a grand reception for favourite Dhoni in the forthcoming IPL. 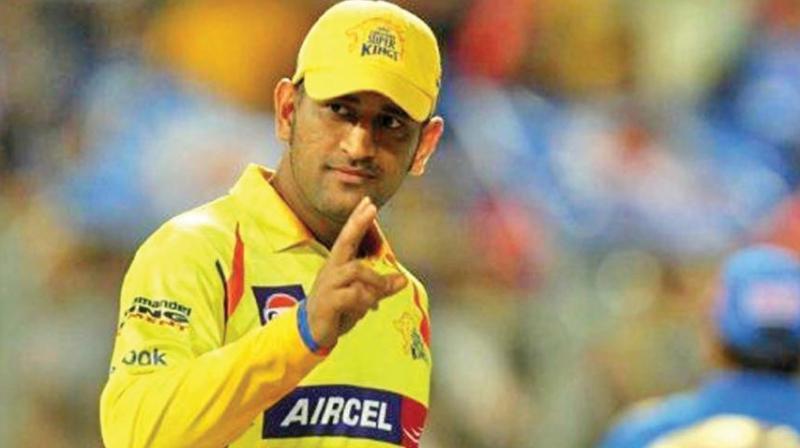 An Instagram photo posted by M.S. Dhoni in July 2017 best illustrated his Chennai Super Kings loyalty. Donning a yellow jersey with ‘No. 7, Thala’ embossed on it, Dhoni flaunted his excitement when BCCI officially confirmed CSK’s return to IPL after a two-year suspension for a team official’s involvement in betting. The photo had another telling symbol of loyalty — an obedient dog sitting with its front paws up.

The love affair between Dhoni and Chennai is mutual. Dhoni calls the Tamil Nadu capital his second home, while fans have put him on a high pedestal that could even rival the top cinema stars. “For cricket fans, he is a mix of ‘Thalaivar’ Rajinikanth and ‘Thala’ Ajith. It’s only fitting that CSK management borrowed a popular Rajini dialogue —Thirumbi Vanthutenu Sollu — to announce the team’s grand return,” says ARR Sriram, the joint secretary of CSK’s official fan club.

It is not known yet if Dhoni has graduated to the Rajini class yet but it won’t surprise Chennai if Dhoni’s cutouts become popular on his comeback in the film-loving  city when his fans will start Pal Abhishekams for the “Cricket Thalaiva.”

The CSK fan club has a grand plan to welcome the franchise by organising an array of social-welfare initiatives in Chennai. They have already organised a number of blood donation camps and celebrated Dhoni’s birthday with children at orphanages.  His fans laughed when they were asked if Dhoni could become a real “Tamil Thalaiva” like Rajini. “Don’t discount anything in Tamil Nadu,” says an observer of politics.

One thing is sure. Dhoni is waiting to get back into the yellow jersey again. Given the huge fan popularity and the camaraderie that he shares with the CSK top management, it was no brainer to have guessed that Dhoni would be retained with the yellow brigade. After all, the brand CSK was built around him and even after the betting controversy their legion of fans rallied behind the franchise.

In CSK’s two-year absence, Dhoni represented Pune Super Giant and fans were always dreading to avoid the scenario of watching their favourite batsman up against Chennai at Chepauk.

“Although we were confident about Dhoni’s coming back to CSK, we were a bit worried — what if rules didn’t allow retention and some other team picked him in auction? We would be neutral if Dhoni plays against CSK and hope that never happens,” said Sriram.

Dhoni as CSK captain has an impressive win percentage of 60.93 in IPL. Apart from winning the title twice, CSK finished runners-up on four occasions and qualified to the playoffs in all eight seasons that they featured in. But as Michael Hussey, former CSK opener and current batting coach, said it wouldn’t be easy to replicate the success they had enjoyed in their first essay.

While Dhoni’s retention was a straightforward choice, CSK management had a lot of deliberation before zeroing in on Suresh Raina and Ravindra Jadeja as their other two retained players. This move meant local star R. Ashwin would go back to the auction pool and it’s highly unlikely that CSK would go for the off-spinner.

With 90 wickets at an average of 24.22, Ashwin is the highest wicket-taker for CSK. “He was instrumental in the two IPL victories by claiming 33 wickets combined at an average of 20.64. In those two seasons Ashwin picked up 11 wickets in Powerplay with a dot ball percentage of 58.33 and at an average of 13.64,” said CSK’s performance analyst, Lakshmi Narayanan in a recent analysis on the team’s official website.

However, Ashwin has not played in limited-overs for the country for about a year and his declining stakes could have gone against him. “Raina is the best batsman and the highest run-getter in the IPL and Jadeja is a multi-skilled player and lends balance to the side,” K. George John, director of Chennai Super Kings Cricket Limited.