The Kiwis removed Labuschagne in the day's first session for 143 and then claimed the valuable wicket of Travis Head for 56. 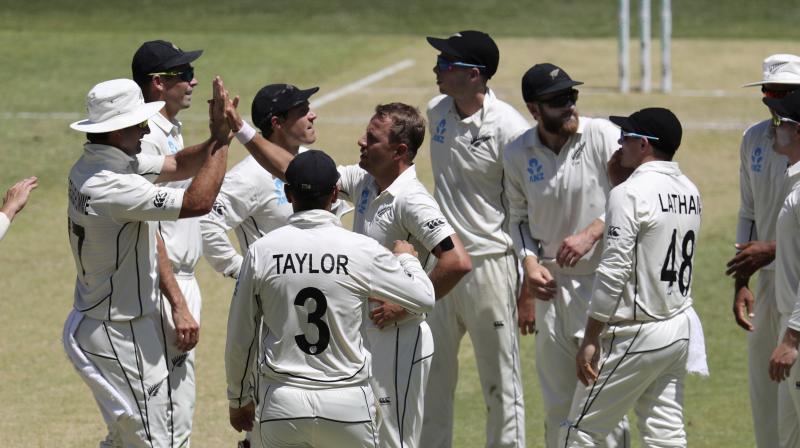 New Zealand's bowlers battled to stop Australia building an imposing first-innings total at lunch on the second day of the first Test at Perth Stadium on Friday. (Photo: AP)

Perth: New Zealand's bowlers battled to stop Australia building an imposing first-innings total at lunch on the second day of the first Test at Perth Stadium on Friday.

In blisteringly hot conditions and down a fast bowler due to the injury to debutant Lockie Ferguson, the visitors toiled away to have the home side 337 for six at lunch. Australian captain Tim Paine was on 15 and Pat Cummins was on five.

The Kiwis removed centurion Marnus Labuschagne in the day's first session for 143 and then claimed the valuable wicket of Travis Head for 56 not long before lunch. They also had a review turned down late in the session, with an LBW appeal against

Paine denied as replays showed he was struck just outside the line of the off stump by the delivery from spinner Mitchell Santner.

With the mercury again climbing towards 40 degrees Celsius (104 Fahrenheit) and a bushfire breaking out just a lusty blow from the ground, the depleted New Zealand attack had its work cut out, but claimed two wickets after Australia resumed at 248 for four.

Ferguson was injured on the opening day and was ruled out of the rest of the match with a right calf strain after bowling just 11 overs. Labuschagne looked set for his third successive innings over 150 when he was bowled by the determined Neil Wagner (3-77).

The 25-year-old hadn't given a chance in reaching 143 but walked a little far across his stumps and the ball crashed into his leg stump to reward Wagner for a spirited spell.

Head was looking solidify his spot in the Australian side but hit a Tim Southee (2-84) ball straight to Santner in cover.

The fire started on the far side of the neighbouring Belmont racetrack about an hour before play started and smoke could be seen rising into the Perth sky.

The fire was quickly put out, but a little smoke blew across to the stadium, bringing a small amount of haze for a brief period.