A brutal spell from Wagner produced three wickets and a broken arm as the hosts romped to a 240-run victory. 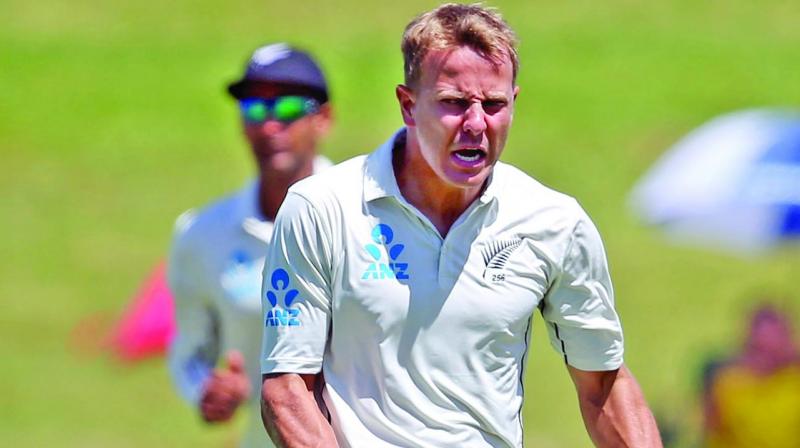 Hamilton: New Zealand congratulated themselves on a smart plan as they decimated the West Indies with a day to spare in the second Test to sweep the series 2-0 on Tuesday.

The tourists struggled to cope in their second innings against New Zealand’s three-pronged fast bowling attack in Hamilton, particularly against a barrage of bouncers from Neil Wagner. A brutal spell from Wagner produced three wickets and a broken arm as the hosts romped to a 240-run victory.

The West Indies, set a target of 444 to win after losing the first Test by an innings, folded at nine for 203 with the injured Sunil Ambris unable to continue batting. “The way we were able to keep putting pressure on them with the ball and bat was a credit to the way we executed our plans,” said captain Kane Williamson.

“Here the bounce became a little bit variable which is great in a Test match. You want to see the surface age a little bit and the way (the bowlers) were able to execute plans was outstanding.”

Wagner, who tormented the West Indies throughout the series with his aggressive short balls, took three for 42 while new-ball pair Tim Southee and Trent Boult grabbed two wickets apiece, as did spinner Mitchell Santner. The victory improved New Zealand's home record to 13 wins, three losses and seven draws in their last 10 home series. While Wagner was the chief destroyer, Williamson said the two significant factors were Boult and Southee’s 61-run stand at the tail of the first innings and Ross Taylor’s unbeaten 107 in the second.

West Indies captain Kraigg Brathwaite laid the blame on his batsmen for failing to learn from the first Test when Wagner took nine wickets.

“We didn’t bat well. The key was to take it over by over, session by session. Obviously it didn't work out that way,” he said.

“It’s key to have your plans worked out and be very decisive in your shot selection.”