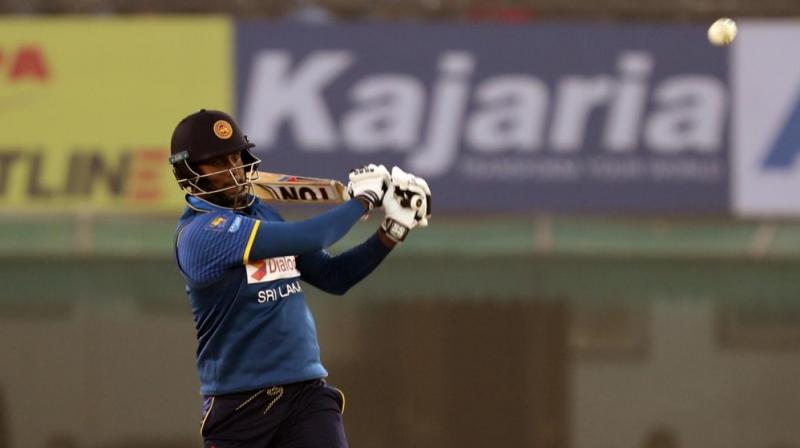 Angelo Mathews struck a vital century to save Sri Lanka from the blushes. (Photo:BCCI)

Mohali: India scripted a thumping 144 run victory against Sri Lanka in the 2nd ODI on Monday at the Punjab Cricket Association, to level the 3-match series 1-1. Rohit Sharma smashed his third double ton that saw the Men in Blue run out as comfortable winners in the end.

After Sri Lanka opted to bowl first, openers Shikhar Dhawan and Rohit provided India with a solid start. However, it was the Mumbai batsman who showed why he is rated among the best batsmen, battering the opposition bowlers round the park.

Such was the pace of Rohit’s 153-ball unbeaten 200 that after notching his ton in 115 deliveries, he smacked the next one in just 36 balls. Shreyas Iyer was another vital contributor as India set up a total of 392-4.

In reply, the visitors looked toothless and never seemed like making their way into the match. Angelo Mathews, however stood tall among the Lanka batsman, blasting a century, but his lone efforts weren’t enough to seal the series.

In the end, India clinched a big victory by the margin of 141 runs to keep the series alive.

CENTURY! It's a well-deserved ton for Mathews, who has been the linchpin of the Lanka batting. Despite losing partners at the other end, he stuck at the crease to keep the visitors in the hunt. But it's already too late.

WICKET! Bumrah bowls a short one at Dananjaya, who is unable to make his mind. The ball makes contact with the gloves and lands straight at Rohit to short backward square leg.

WICKET! Bhuvneshwar bowls it outside off and Pathirana looks to punch it over extra-cover. Doesn't make good contact and gives Dhawan an easy catch.

WICKET! Chahal on a roll, gets rid of Thisara Perera. The batsman goes for a mighty slog, but fails to connect. The ball nicks the bat, then brushes the pad before going up in the air. Dhoni at short leg streches to complete the dismissal.

WICKET! Chahal gets his second. Gunaratne attempts to smack it over extra cover, but is bamboozled by a slow one by the leggie. Dhoni does the rest behind the wickets.

WICKET! Dickwella falls cheaply. The southpaw slashes a delivery outside Chahal and guides it straight to Sundar at short third.

Washington Sundar picks up maiden ODI wicket, Lahiru Thirimanne departs cleaned bowled by the young off spinner. The batsman tries for reverse sweep only to see the ball hit the timber.

Early strikes by Team India bowlers Hardik Pandya and Jasprit Bumrah have put Sri Lanka under little pressure. With Tharanga and Gunathilaka back to pavillion, the onus will be on Lahiru Thirimanne and Angelo Mathews to steady Sri Lanka innings.

WICKET! Sri Lanka have lost Danushka Gunathilaka, who has departed for 156 runs. Is this the beginning of Sri Lanka's collapse?

Rohit Sharma scored an unbeaten 213 runs as India posted 392/4 in 50 overs in the second ODI at IS Bindra- PCA Stadium in Mohali. After winning the toss Sri Lanka decided to bowl first.

Rohit Sharma and Shikhar Dhawan started cautiously before cutting lose . Dhawan scored 68 runs before he  was caught by Thirimanne off Pathirana. Rohit along with Shreyas Iyer (88 runs), then stitched together 213 run partnership for the second wicket to put India in commanding position.

After Iyer's wicket Rohit changed gears as he single handedly destroyed Sri Lankan bowling attack hitting them for sixes with ease. Sri Lanka bowlers were left helpless as Team India skipper was plundering the attack all over the park. Nuwan Pradeep was at the receiving end for Sri Lanka as he gave away 106 runs without taking a single wicket.

Sri Lanka skipper Thisara Perera was the most successful bowler picking up 3/80.

Rohit Sharma finishes the innings with his third double century, while Shreyas Iyer scored 88 ruins as both the batsman put on 213 run stand for the second wicket. The Indian captain provided the late flourish to put his team firmly in control of the match.

Thisara Perera strikes, removes MS Dhoni for 7. Slower ball from the Sri Lanka captain as Dhoni fails to connect and the ball hit his back leg.

Shreyas Iyer started the innings slowly and have provided good support to Rohit Sharma. After failing to score big runs in 1st ODI the youngster has so far showed great composure and is slowly reaching towards his maiden ODI 50

After putting up century stand  Team India lose Shikhar Dhawan, who lost his wicket after completing his 23rd ODI fifty. Sachith Pathirana provided the breakthrough for the Lankans.

WICKET! Shikhar Dhawan departs, Sri Lanka strike. Sachith Pathirana picks up first wicket of Indian innings. After seeing the batsman coming down the track Pathirana bowls the ball fuller on leg stump. Dhawan goes through with the shot but hits it straight into the hands of Thirimanne at short mid-wicket.

India have eased past 100, as the duo of Rohit Sharma and Shikhar Dhawan have brought up their century-run partnership.

FIFTY! What a brilliant knock by Shikhar Dhawan, as he gets to his 23rd ODI half-century. Can he take India all the way?

Mohali: Sri Lanka skipper Thisara Perera has won the toss and the visitors have elected to bowl  in the second ODI at IS Bindra-PCA Stadium here on Wednesday.

While Sri Lanka have retained the playing XI which powered them to a seven-wicket win in Dharamshala, India have made one change to their side as Kuldeep Yadav made way for debutant Washington Sundar.

Sri Lanka have won the toss and will bowl first. Sri Lanka are unchanged, India get in Washington Sundar in place of Kuldeep Yadav #TeamIndia #INDvSL pic.twitter.com/BqfYy4RJ4Y

We have a new kid on the block. Washington Sundar is all set to make his ODI debut here in Mohali #TeamIndia #INDvSL pic.twitter.com/VxquVkgSIa

After facing an embarrassing defeat in Dharmashala against Sri Lanka, Team India will be eager to level the series in the 2nd ODI which will be played at the IS Bindra-PCA Stadium in Mohali on Wednesday.

The Sri Lankans, who ended their 12-match losing streak with a win at Dharamsala, will look to close the series by winning the second ODI in Mohali.

Suranga Lakmal and the rest of the Sri Lankan pacers, who had blown away Indian batsmen,  will once again look to do the same.

Lankan skipper Thisara Perera has asked for a Dharamshala-like performance from his team in Mohali. "It is a good opportunity to win the series. Not many teams have won series in India. We want to do something special like we did in Dharamsala," he said.

Rohit Sharma, who is leading Team India in absence of newly married Virat Kohli, said that loss in first ODI was an eye opener for the team. He had promised that the team will learn from Dharamsala debacle and bounce back in the remaining two games.

“It is important to thrive in these conditions and come out good. It is an eye-opener for all of us," said Rohit said at the post-match conference.

For Team India the onus will be on batsman to deliver the goods this time around after failing miserably in Dharamshala. After the experienced Rohit Sharma and Shikhar Dhawan fell early, Shreyas Iyer, Dinesh Karthik, Manish Pandey and Hardik Pandya failed to make a big score. It was MS Dhoni's fighting 65, which saved India from embarrassment, else the home side would well have registered their lowest ever total in ODIs.

Where you can watch the match live?

The match can be telecast on Star Sports 1 and Star Sports 1HD. The game can also be streamed live on Hotstar.