R. Ashwin (6/55) ran through England’s lower-order as Virat Kohli and Co. won the Mumbai Test by an innings and 36 runs. 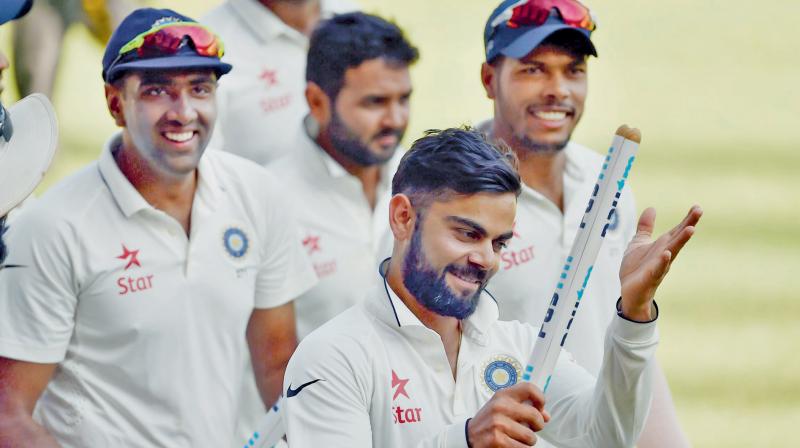 R. Ashwin (6/55) ran through England’s lower-order as Virat Kohli and Co. won the Mumbai Test by an innings and 36 runs.

Two of India’s premier match-winners from the current unit, Ashwin, the world no. 1 bowler and all-rounder in Tests, who claimed his seventh 10-wicket haul, and skipper Kohli, who scored record-breaking 235 runs, played pivotal roles in India’s win at the Wankhede Stadium.

England, who were 182/6 at stumps on Day 4, were banking on Jonny Bairstow and Jos Buttler to put up a fight to go past India’s lead. But Ashwin’s magic, which saw him claim all the four wickets on Day 5, was a bit too much for Bairstow, who could only add a run to his overnight score of 50.

While Buttler remained unbeaten on 6, Ashwin, who now has 27 wickets in the series, got the better off Chris Woakes (0), Adil Rashid (2) and James Anderson (2).

England, who had lost the previous two Tests in Vizag and Mohali and needed a win here to keep alive the series, scored 400 batting first. However, their failure to cash in on half-chances meant that they become the first team to lose a Test match by an innings two times after scoring 400 runs in the first innings.

“We missed three good chances to take wickets and they made us pay. That is credit to India. Most teams, who score runs give chances at some stage, and it is about a side being good enough to take them. Missing Kohli, missing Vijay and Yadav cost us dearly,” added the England captain.

Adil Rashid spilling Kohli’s catch when he was on 68, Joe Root dropping Jayant on Day 3, clearly turned the tide of the match as the duo put up 241-stand, with Kohli scoring 235 and Jayant 104. The knocks from Kohli and Jayant, following Murali Vijay’s ton (136), powered India to a 231-run lead.

While Joe Root (77) and Bairstow (51) did put up some resilience, it was clear that England were just delaying the inevitable.