Sports   Cricket  13 Nov 2019  Virat Kohli says that India needs to keep up with the standard which they themselves have set
Sports, Cricket

So far, India have played two against West Indies and three against South Africa, in the Championship and have won all of them. 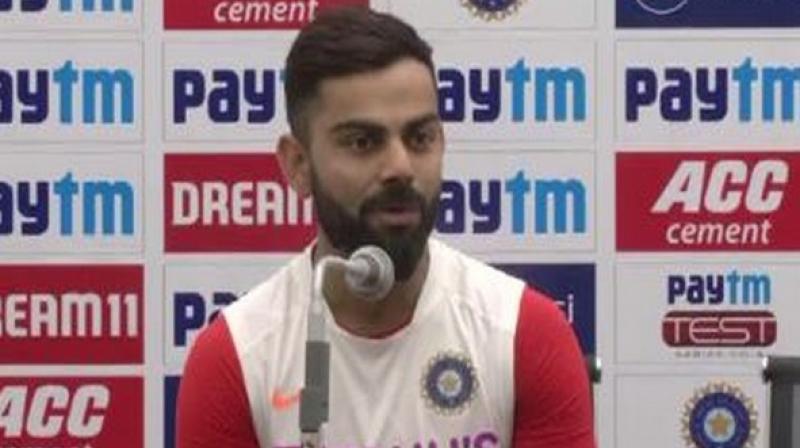 According to Virat Kohli, not losing the attacking spirit with the ball despite it being soft is the key to win matches. (Photo: ANI)

Indore: Being the top-placed team on ICC World Test Championship's points table, India skipper Virat Kohli said the only challenge waiting for them when they take on Bangladesh will be to keep up with those standards.

"The challenge would be to keep up to those standards again and play that kind of cricket again which, I feel, the guys are in the frame of mind to do that. They are hungry, everyone looks very happy, anticipating the Test match," Kohli said in the pre-match press conference here on Wednesday.

So far, India have played five Test matches, two against West Indies and three against South Africa, in the Championship and have won all of them. The Men in Blue have 240 points, 180 points ahead of second-placed New Zealand.

According to Kohli, not losing the attacking spirit with the ball despite it being soft is the key to win matches.

"I think the idea is to have a balanced field and still keep attacking the batsmen with the soft ball and try to take a couple of wickets and when the hard ball arrives, you can be on top again. That has been successful for us, honestly, after the series we had against South Africa, it is very difficult to pin out what are the things which are alarming that we need to work on. I think we had a pretty complete series," he said.

The 31-year-old said that a player cannot afford to take away his focus from the game in Test cricket.

"In test cricket, you cannot afford to take away the focus at any time at all. Not even one session or not even one over because with the red ball you need to be absolutely precise with your focus every game that you play, every ball that you play and every situation that you are in," Kohli said.

The second match between India and Bangladesh will be a day-night Test and will be played with a pink ball. Kohli said that it is a new way to bring excitement in the longest format of the game.

"It is quite exciting, it is a new way to bring excitement to Test cricket. So, we all are very excited about that. I played with the pink ball yesterday, I felt like it swings a lot more compared to the red ball... I do not know how the old ball behaves; it will be interesting to see how much the old ball does," Kohli said.

The first Test match will commence on November 14.