Reasons why selectors must look beyond Shikhar Dhawan in T20Is

In the last T20I series concluding match against Bangladesh, the 33-year-old scored 41 at a below-par strike rate of 107.05. 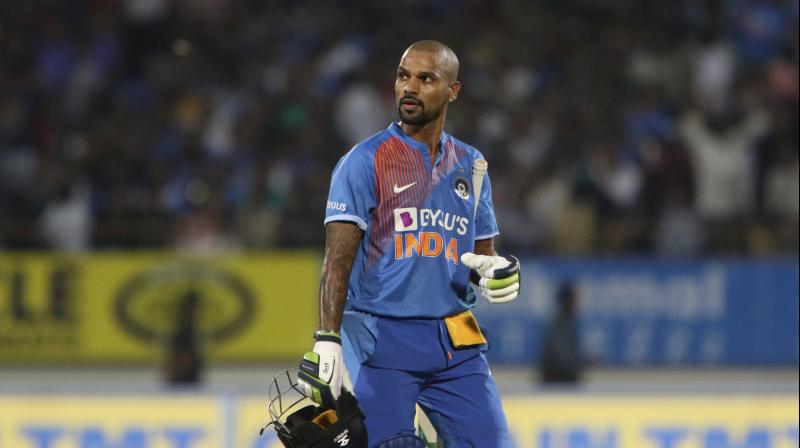 Apparently, it seems that India’s prime and limited-overs opener, Shikhar Dhawan is running out of gas, as the southpaw has failed to produce any match winning performances in the shortest format of the game. During the last 12 T20Is, Dhawan piled up just 272 runs at a strike rate of 110.56. Moreover, among those 12 games, there were five games, in which he had a strike rate below 100. (Photo:AP)

Mumbai: Apparently, it seems that India’s prime and limited-overs opener, Shikhar Dhawan is running out of gas, as the southpaw has failed to produce any match winning performances in the shortest format of the game.

In the last T20I series concluding match against Bangladesh, the 33-year-old scored 41 at a below-par strike rate of 107.05.

While during the whole series, the left-hander could just amass 91 runs. Since he sustained an inury during the 2019 World Cup, the “Mr ICC” failed to deliver any notable or watch winning performances.

Dhawan’s lack of intent has raised doubts over selection.

Recently, the southpaw scored a 40 and 36, however, the Indian opener’s series of poor performances, have led the Indian middle-order to come under pressure.

With the ICC T-20 World Cup is scheduled to occur in next year in Australia, the selectors and the team management have to start re-thinking about Dhawan’s possible replacement.

Statistics and records have proof that the ODI specialist opener has not been at his best in the T20Is.

Recently, the Delhi Capitals player endured a horrible tour of West Indies, in which he scored just 27 runs in 3 matches.

However, his poor run of form has also forced the selectors and the team management to consider KL Rahul as a probable opener.

Dhawan has been very conservative in his batting approach and that was evident during the T20I series against West Indies, South Africa and Bangladesh.

On the other hand, Rahul has been aggressive in the shortest form.

Dhawan has scored 501 runs in his last 17 T20Is, despite that his knocks did not prove to be effective, as he took time to settle before scoring boundaries.

Interestingly, Dhawan’s record Down Under has been phenomenal, as in six T20Is the left-hander has scored 190 runs at an average of 38 and a mind-blowing strike rate of 168.14.

If the selectors and the team management want to persist with Dhawani, only this record may reason why they still want him to be India’s opener.

Meanwhile, Rahul has an impressive record in the T20Is. The Kings XI Punjab (KXIP) has scored 922 runs at an average of 41.91, along with a strike rate of 145.2, including two 100s and five half-centuries.

KL has played just 14 T20Is, but after playing those 14 games, a strong message was sent to the selectors and the management as he amassed 535 runs at an average of 41.

Moreover, the right-hander also scored the fastest fifty in the tournament - a record he achieved in 2018, when he scripted history in 14 balls.

The 2020 T20 World Cup will definitely be decider – as to who will be the opener for India in the mega-event in the shortest format.

If KL continues his scintillating form, the selectors and the team management must start searching for a new opener.