The 25-year-old felt jubilant after bringing up his maiden Test ton, especially since he had missed that goal by seven runs in first Test. 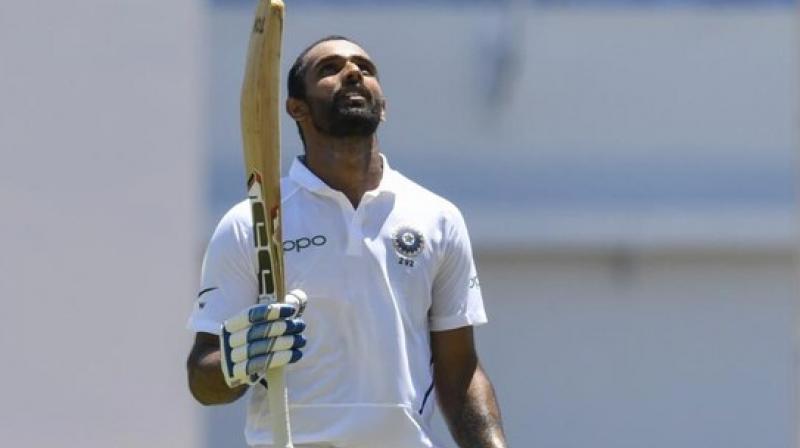 Vihari's ton helped him become the first Indian batsman since Sachin Tendulkar in 1990 to score a century and a fifty in the same Test while batting at No. 6 or lower. (Photo: AFP)

New Delhi: Indian skipper Virat Kohli revealed on Thursday how late former Finance Minister had motivated him after the demise of his father when he was only 18.

Speaking on the occasion, Kohli said: “It is more special. It is happening at the same time as the stadium being named after Arun Jaitley Ji.”

“I know Jaitley Ji as a person who came to my house and encouraged me when my father passed away. He also motivated me. So, I had a special connection with him. He was a very good person. So, it is a proud moment that both the things happened at the same time,” he added.

At the time of his father's death in 2006, an 18-year-old Kohli was playing for Delhi against Karnataka in a Ranji Trophy game where he went on to score 90 runs.

“I was playing a four-day game at the time and was supposed to resume batting the next day when this (father passed) happened at 230 odd in the morning. We all woke up but had no idea what to do. I literally saw him breathe his last,” Kohli had told Graham Bensinger in an interview.

"Virat Kohli's outstanding contribution to world cricket has done DDCA proud. We are happy to honour him for achieving certain milestones and unbeatable captaincy record," DDCA President Rajat Sharma said in his statement.

The Indian skipper became the youngest active cricketer to be bestowed with the honour of a stand named after him.

“I never thought that I will be honoured at a big stage like this. Thank you so much Rajat Sir and Amit Shah ji for doing the honours. Also, my team with whom I spend most of my time, a special group of people... It is a very proud moment for me and my whole family,” thanked Kohli.