Ashes 2019: Australia expose hosts again as England get to 271-8 at the end of the day one

England’s batting frailties were exposed again as they wasted a solid start and got to 271 for 8 on the 1st day of the final Ashes Test. 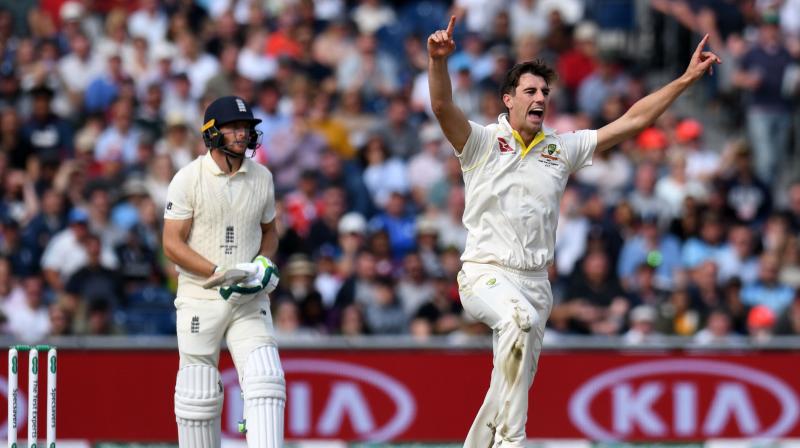 The Australians, who have retained the Ashes, dropped England captain Joe Root three times as he made 57 but the hosts failed to take full advantage and only Jos Buttler’s late unbeaten 64 saved them from complete collapse. (Photo:AFP)

London: England’s batting frailties were exposed again as they wasted a solid start and laboured to 271 for eight on the first day of the final Ashes test against Australia at The Oval on Thursday.

The Australians, who have retained the Ashes, dropped England captain Joe Root three times as he made 57 but the hosts failed to take full advantage and only Jos Buttler’s late unbeaten 64 saved them from complete collapse.

“The boys batted really well in the morning and we got ourselves into a fantastic position but could not capitalise,” Buttler said.

“Both sides are feeling a long series with a quick turnaround between tests so that’s why the intensity goes up and down. Australia are a really good bowling attack and asked questions all day. It’s frustrating for us not being able to capitalise on our start.”

Medium-pacer Mitchell Marsh took four wickets to boost Australia’s bid to secure a 3-1 series win after their captain Tim Paine won the toss and surprisingly sent England in to bat.

Joe Denly, on 14, played a loose stroke at a wide delivery from Cummins and edged to second slip where Steve Smith fumbled the chance before grabbing the ball before it hit the ground.

The opening partnership of 27 was the highest of the series but it was another failure for the 33-year-old Denly, who made battling fifties in the last two tests without staking a claim to a long-term place in the team.

Root, badly dropped on 24 by Peter Siddle at fine leg after playing a casual pull stroke, was also put down by wicketkeeper Paine off Cummins and England reached lunch at 86-1.

Root was given another life when Smith spilled a sharp chance in the slips but Rory Burns hit seven fours in another determined knock.

The young opening batsman was three runs away from his half century when he got cramped up by a short ball from Hazlewood and spooned a simple catch to Marsh at mid-wicket.

Ben Stokes, loudly cheered to the wicket after his match-winning century in the third test, cautiously moved to 20 before he was tempted into a wild heave at medium-pacer Marsh and the ball looped off a leading edge to point.

Root got to a patient fifty, off 105 balls, and his side moved on to 169-3 at tea, but any hopes England had of a substantial score disappeared in the final session.

Root was bowled by a fine Cummins delivery which hit his off stump and Jonny Bairstow was trapped lbw for 22 by a Marsh yorker.

Sam Curran hooked Cummins for an audacious six but two deliveries later the young all-rounder was adjudged lbw, only to be recalled to the crease because Cummins had bowled a no ball.

His reprieve was short-lived, however, as Curran edged Marsh to Smith at second slip for 15 and the same bowler snared Chris Woakes lbw to claim his fourth wicket on his recall to the side.

“I was like a kid at Christmas this morning,” Marsh said. “It can be a long tour when you are not playing. I just wanted to try and get an opportunity at some stage and it was nice to produce today. The ball came out reasonably well.”

Jofra Archer then nicked Hazlewood to Paine before Buttler briefly lifted the crowd by hitting Hazlewood for two sixes in a row.

Buttler pulled Hazlewood over the ropes again to reach his fifty and with Jack Leach providing obdurate support, the ninth-wicket pair shared an unbroken stand of 45 to boost England’s chances of levelling the series.