Stoinis credited his performance to a combination of factors including having India’s S. Sriram as a spin consultant. 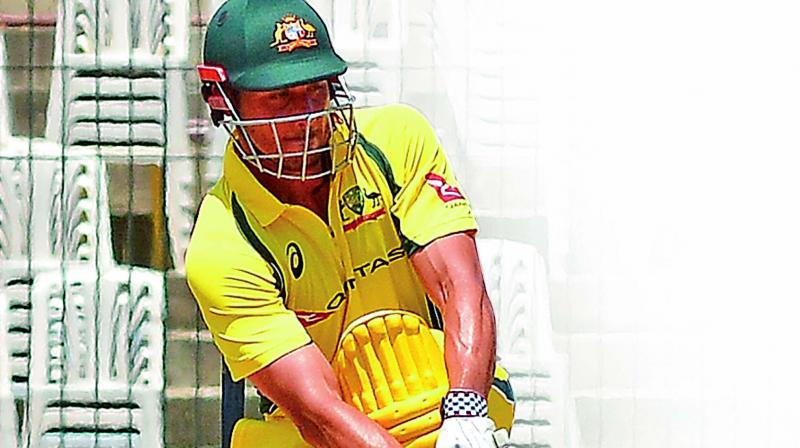 Marcus Stoinis en route to his half-century against Board President’s XI in a warm-up game. (Photo: E.K. Sanjay)

Chennai: Australian all-rounder Marcus Stoinis must be hoping that he has done enough with a dazzling 76 off 60 balls against Board President’s XI on Tuesday to stake his claim for a slot against India in the first ODI on Sunday.

Stoinis credited his performance to a combination of factors including having India’s S. Sriram as a spin consultant. “Having been exposed to these conditions certainly helps as I have played in the IPL in addition to being part of Australia’s ‘A’ tour in 2015.

“I worked with Sriram for four months on the trot. I learned from him that it is always good to defend first before going on the offensive in the sub-continent.”

The 28-year-old Australian said there were a lot of positives to take back from the warm-up match. “Quite a few of us made some good runs. Ashton Agar bowled beautifully. It is also about understanding these conditions and what lengths you want to bowl. I think everyone will take back something from the game individually,” he added.

Earlier this year, Stoinis smashed his highest score of 146 against New Zealand but was still not able to make his way back into the ODI side. “There are a lot of people in the same position as I’m. For one reason or the other, selection doesn’t go your way. That happens in every single series and selection is tough. Not all of us understand what goes on in selection,” he said.

With Faulkner back in the team after a four-month lay-off, Stoinis faces stiff competition from the all-rounder for a spot in the team. The Australian, though, feels it is a good headache to have.  “He absolutely dominated here in 2013. We are different, even though we are both all-rounders. He is more into bowling and I’m into batting. As a left-arm bowler he adds a lot to the team. I’m not a selector but maybe there is room for both of us,” he added.