The two Tests open the new ICC World Test Championship, which will be played over the next two years. 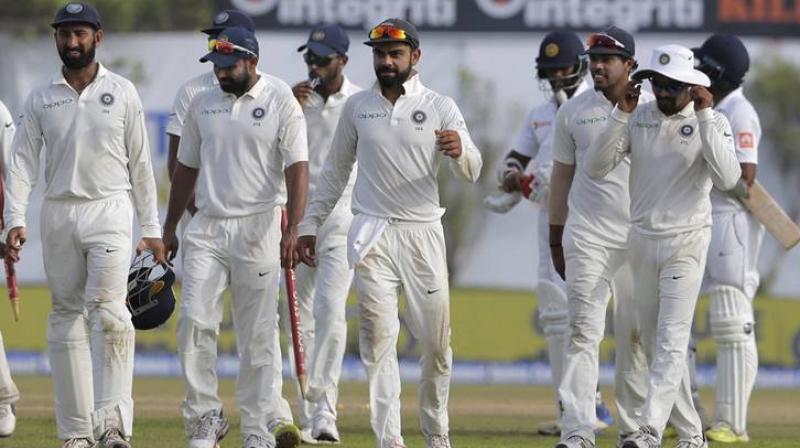 The Indian team will test themselves in two Test matches from August 22 to 26 at the Vivian Richards Cricket Ground in Antigua. (Photo: AFP)

The five-week tour will see the teams competing in three T20Is and as many ODIs before testing themselves in two Test matches from August 22 to 26 at the Vivian Richards Cricket Ground in Antigua and from August 30 to September 3 at Sabina Park in Jamaica.

The two Tests open the new ICC World Test Championship, which will be played over the next two years. It has been introduced to give greater context and competition in the ultimate test of the game, combining strategy, skill and endurance.

"The West Indies and India have a long and colourful rivalry, and the series will bring more thrilling competition across every format of the game. We'll be seeing some of the World's best players go head to head in T20Is, ODIs and then in the new World Test Championship. West Indies fans, young and old, will have the opportunity to see some incredible cricket," said Cricket West Indies (CWI) Chief Executive Officer, Johnny Grave in a statement.

The first two T20I matches will be played on August 3 and 4, respectively, at the Broward County Stadium in the city of Lauderhill in Florida, USA.

The third T20I will be played on August 6 at the National Stadium in Guyana, where the series also transitions to the 50-over format with the first ODI taking place on August 8, the first time in three decades the two sides will contest in an ODI in the South American nation.

The ODI series will conclude at the Queen's Park Oval in Trinidad where teams will meet for second and third ODI on August 11 and 14, respectively.

"This continues our plans of growing our audience and the game's appeal in North America to increase participation and investment back into the West Indies.

The series will provide a chance for a growing audience in the United States, who follow the West Indies, to experience the fast-paced action of the T20 format," Warne added.