Statistics say that Pant doesn’t hold a good record in ODIs. In all the 5 ODIs that Pant has managed to notch up only 93 runs. 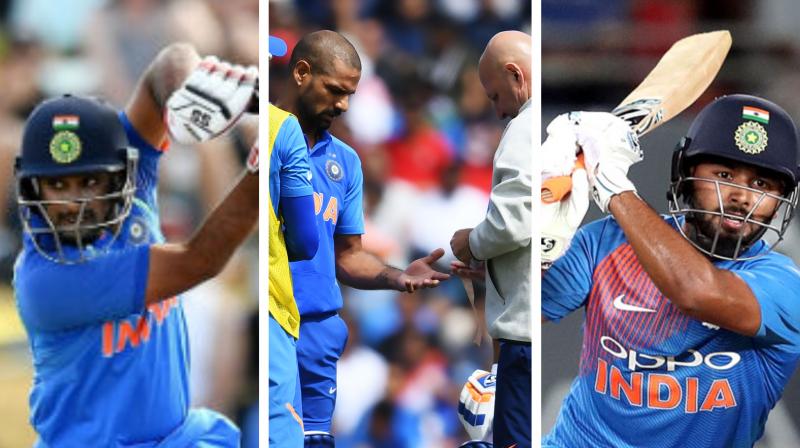 Left-handers have an upper edge over leg-spinners, a vital reason why Pant has been slotted into the middle-order of India's batting line-up. (Photo:AFP)

Mumbai: Shikhar Dhawan’s injury has made BCCI to scratch its heads, bringing the issue of number batting slot back again. However, the team management will push KL Rahul up the order to open the innings with Rohit.

KL has already notched up his maiden hundred during the warm up match against Bangladesh. And, KL has been opening the innings for Kings XI Punjab during the IPL. So, the problem of a back opener is sorted as of now.

The selectors have worked out that KL Rahul can perform Dhawan's role should he fail to recover, which is the rationale behind choosing Pant, a middle-order batsman, as cover. Rahul was originally picked as the third opener in the squad, but sneaked into the XI last minute as No 4.

The selectors have shown faith in KL Rahul for performing injured Dhawan's role. Rahul was picked in the squad for World Cup 2019 as the third opener, but he was assigned the Number Four spot in the starting eleven.

Dhawan is India's only specialist left-hander, and he smashed Australia's bowling plans during his century this week. Left-handers have an upper edge over leg-spinners, a vital reason why Pant has been slotted into the middle-order of India's batting line-up.

"It's definitely a case where we have debated at length and all of us in unison felt that either Rishabh Pant or Karthik will only come into the playing eleven if Dhoni is injured," selector MSK Prasad had said of the decision.

"If it is a crucial match, like a quarter-final or a semi-final or like an important game, wicketkeeping also matters. So that's the only reason that we went ahead with Karthik. Otherwise, Pant was almost there."

Now, the real question which remains is who will bat at number four – will it be Vijay Shankar or World Cup. After Shikhar Dhawan picked up a thumb injury, BCCI was forced to call Rishabh Pant, who was earlier ousted from the final 15-member World Cup squad.

Though, the apex cricket body of India hasn’t named any official replacement for Shikhar Dhawan as the selector and the team management want to see if the ‘centurion’ of the last match gets fit before the match against England.

The team management is with Shikhar Dhawan and it wants to ensure if Dhawan can be fit before the England match. Speaking on Dhawan’s injury, India’s assistant coach Sanjay Bangar had said, “As far as Shikhar is concerned, we are observing him and it will take some time, around 10 or 12 days to figure out where he stands.”

"We will be in a better position to take a call then because we don't want to rule out a precious player like Shikhar, straight at the time of the injury."

This means that Dhawan have to sit out of the matches against New Zealand (Thursday), Pakistan (Manchester, June 16), Afghanistan (June 22, Southampton) and West Indies (June 27, Manchester).

After Rishabh Pant was called as a cover for Shikhar, the assistant batting stated, "Since Dhawan's assessment will take 10-12 days, till that point of time, we wanted to make sure if and when the replacement is required and I am saying if and when, then it is always good to have a replacement player coming in and practising with the team as a stand-by."

After Shikhar Dhawan got injured, experts like Sunil Gavaskar and Kevin Pieterson immediately voted for Rishabh Pant’s inclusion, while, former player Gautam Gambhir suggested Ambati Rayudu would be a better replacement for Dhawan who injured his thumb during India’s win over Australia at the Oval on June 9.

“He (Pant) has been in cracking hot form in the IPL. He would probably want to show that he deserved to be in the team in the first place," said Gavaskar to 'India Today'.

He added that should the doctors say that Dhawan can be fit in 18 days, then the team’s best bet would be to stick with him, even if it means the batsman misses the England Game on June 30.

Gambhir meanwhile spoke to Star Sports saying that “If Ambati Rayudu doesn't make it as Shikhar's replacement than his career is over. He averages 45 in ODIs and not being part of the World Cup with that average is very disappointing.”

Gambhir went on to add that if Rayudu doesn’t make it to England, he might as well pack his bags and focus on the IPL since his international career “is over”.

If Pant is included in the squad then should the team management make him bat in the middle order or be a reserve middle-order batsman as Vijay Shankar and Dinesh Karthik are more likely to get a chance ahead of Pant.

Statistics say that Pant doesn’t hold a good record in ODIs. In all the 5 ODIs that Pant played, the 21-year-old has managed to notch up only 93 runs at an average of 23.25.

This is why Pant is favoured so much in ODIs. However, the Delhi Capitals opener was in touch in the 2019 IPL season. Pant amassed 488 runs in 16 matches including three 50s.

However, it remains to be seen if the team management decides to include Pant in the playing XI or do they include Karthik or Vijay Shankar. And, if Ravi Shashtri and his staff decide to include Dinesh Karthik, then, they might as well push Dinesh Karthik down at number five or six and promote Dhoni up at number four.