Australia reduced Pakistan to 200-7 chasing a target of 308, with Cummins taking an economical 3-33 from his 10 overs. 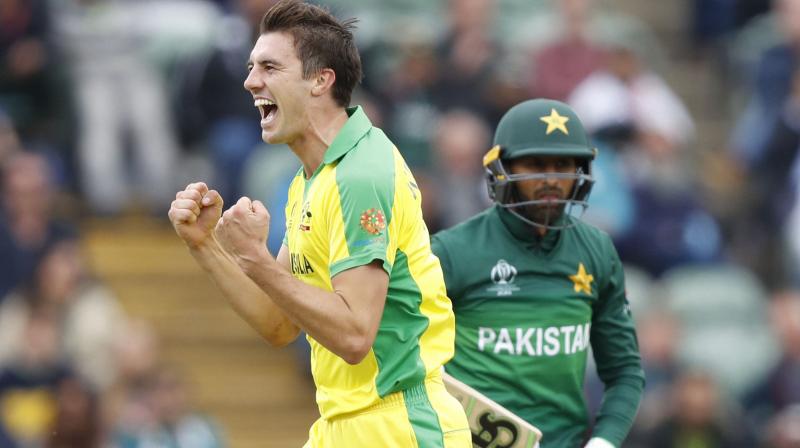 "It goes to show that everyone can bat these days," said Cummins. (Photo: AP/PTI)

Taunton: Australia fast bowler Pat Cummins said Pakistan's late rally with the bat was a timely warning for the defending champions even though his side returned to winning ways at the World Cup.

Aaron Finch's side won by 41 runs at Taunton on Wednesday as they recorded their third win of the campaign in England and Wales following their defeat to India.

Australia reduced Pakistan to 200-7 chasing a target of 308, with Cummins taking an economical 3-33 from his 10 overs.

But an eighth-wicket stand of 64 between Pakistan captain Sarfaraz Ahmed and Wahab Riaz, who hit a rapid 45, provided Australia with some worrying moments before a late collapse saw the final three wickets fall for just two runs.

"It goes to show that everyone can bat these days," said Cummins. "It was a bit closer than we would have liked, so it was good to get those couple of wickets and finish it off.

"We gave them a bit too much width and suddenly they were back in the game," the 26-year-old added. "It's a good lesson to learn."

New South Wales quick Cummins struck early against Pakistan, removing Fakhar Zaman, and then made another important breakthrough when he had Imam-ul-Haq caught behind for 53.

But what pleases the fast bowler most about his current form in one-day internationals is the increasing number of dot balls -- deliveries off which no runs are scored -- that he is sending down.

"That's the big improvement in my game in the last couple of years, the ability to hold a length and make it difficult to get runs," Cummins explained.

"If you give away easy singles then 300 becomes quite an achievable score. Cutting out the singles is huge, it means if you give away a boundary it might not be that big over of 10 or 11, it may just be a five or a six."

David Warner had earlier scored his first international century since completing a year-long ban for his part in a ball-tampering scandal.

Warner had been uncharacteristically sluggish in scoring 56 off 84 balls against India at the Oval but he was back to his fluent best against Pakistan, facing just 111 balls in total.

"We were so pumped for him, he was really open and honest after the Oval game," said Cummins. "He was playing more timidly than normal but we saw his mindset change from the start here."