'IPL can help you judge yourself before World Cup 2019,' says Rohit Sharma

India will take on NZ and Bangladesh in warm-up matches before opening its WC campaign against South Africa on June 5 at Hampshire Bowl. 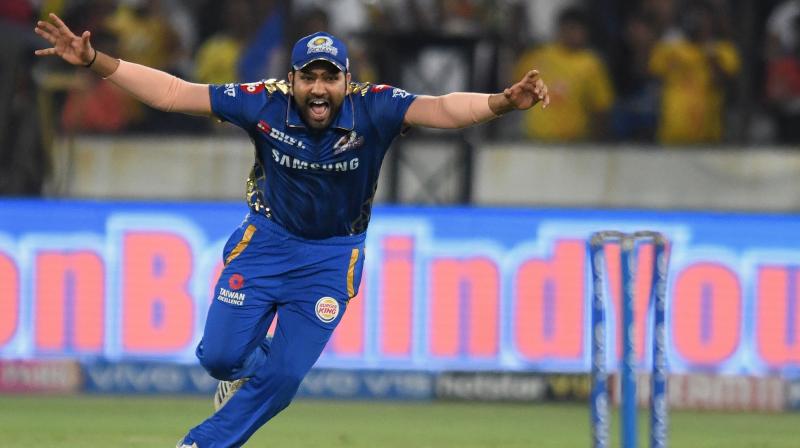 Hyderabad: Mumbai Indians' captain Rohit Sharma believes the Indian Premier League (IPL) is a platform where you can judge yourself before the ICC Men's Cricket World Cup 2019, which will start on May 30.

"It's (IPL) a big tournament and you can judge yourself where you are at before a big tournament like the World Cup," Rohit said after securing Mumbai's fourth IPL title by one run against defending champions Chennai Super Kings.

"Before the IPL, if they were not in great form, this is the time they can get back to form. Hardik (Pandya) is the best example. Before the IPL, he did not have a good time, was injured, and missed a few games as well. But he has been tremendous for us -- both in batting and bowling," he said.

Hardik scored 402 runs at 44.66, striking them at 191.42 and returned with 14 wickets. Another key performer for Mumbai was Jasprit Bumrah, who finished as Mumbai's leading wicket-taker with 19 scalps at 21.52, conceding runs at 6.63 an over. The fast-bowler was adjudged the Player of the Match in the final on May 12, for returning with the figures of 2/14.

"We spoke at the start of the tournament that we will assess each of the players, see where they are at and what they feel about their bodies. It is more an individual thing than (what) we decide for them."

"In the case of Jasprit, he is someone who likes to play games to make sure he is in a good rhythm. At the start of the tournament, we spoke that at any given stage, if he feels he needs to rest, we were open to that. But our physios and trainers have monitored him quite well, and there was constant feedback from Jasprit as well about how he is feeling. We have not had issues with Jasprit and Hardik, so we continued to play them," Rohit said.

India will take on New Zealand and Bangladesh in the warm-up matches before opening its World Cup campaign against South Africa on June 5 at Hampshire Bowl.