Mumbai edge Chennai in a last-over thriller to prove who the big brother is by winning their fourth IPL trophy. 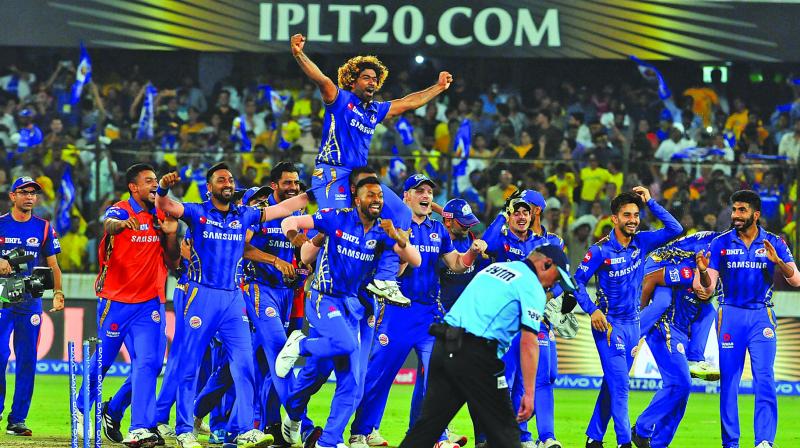 Hyderabad: After beating Chennai Super Kings for the fourth time this season, on this occasion in the all-important final, Mumbai Indians proved who the big brother is. In a match that ebbed and flowed, the Blues successfully defended a modest 149 for 8 to beat the Yellows by just one run and win the coveted trophy for the fourth time.

Needing nine in the last over bowled by Lasith Malinga, Chennai’s No.8 Shardul Thakur was tasked with getting two off the last ball. He could not read the Sri Lankan quick’s trajectory though and was out leg before wicket to set off celebrations in the Mumbai camp.

Captain Rohit Sharma became the only player to win five IPL titles — four for the Mumbai Indians and one with Deccan Chargers, in 2009. A cent per cent success rate too, having won all the five finals he has played.

Chasing a modest target, Chennai came out swinging. Faf du Plessis (26) and Shane Watson (80) had rattled 33 in four overs when the former got greedy for more, jumped out of his crease in search of another boundary missed left-arm spinner Krunal Pandya’s line and was stumped by his South African colleague Quinton de Kock behind the stumps.

Suresh Raina and Watson put on 37 runs for the second wicket as the yellow submarine cruised but then a triple whammy — wickets of Raina, Rayudu and Dhoni — severely dented the vessel.

Dhoni’s run out, courtesy Ishan Kishan’s direct hit as the CSK skipper tried to steal a second run over an overthrow, tilted the scales in delirious Mumbai’s favour. Chennai 82 for 4 in the 13th over.

It could’ve been worse three runs later, in the next over, had Rahul Chahar held on to a powerful shot from Watson off his own bowling. Chahar dropped the batsman again, this time a simple chance in the 17th over off Jasprit Bumrah.

Bravo and Watson then put on 51 for the fifth wicket during which they took 20 runs each off the 16th and 18th overs bowled by Lasith Malinga and Krunal Pandya respectively to get Chennai’s equation back on track... before Mumbai hit back.

Earlier, Mumbai got off to a flyer but could not get partnerships going, 45 for the opening wicket being their best one. Hardik Pandya and Kieron Pollard’s 39-run stand for the sixth wicket and 37 between Suryakumar Yadav and Ishan Kishan for the third got them to a decent total.

Pollard (41 not out) and de Kock (29) were the only batsmen who could come up with respectable knocks against a canny CSK attack as the Blues buckled.

Hitman Rohit Sharma got into business in the second over, smashing Shardul Thakur over square leg for the first six of the match. De Kock turned it on from the other end, depositing Deepak Chahar thrice over the boundary to take 20 runs off the third over as Mumbai motored on. Quinton thumped another six off Shardul but fell trying to repeat it, the top edge pouched comfortably by Mahendra Singh Dhoni behind the stumps. It prompted a vigorous, non-verbal send off to the batsman from Thakur. Mumbai 45 for 1 in the fifth over. It was 45 for 2 soon — Rohit caught by Dhoni again, off Chahar, who bowled a wicket maiden in the last over of Power Play.

Suryakumar Yadav was stunned by an Imran Tahir googly that he played on to this stumps and then Thakur pulled off a terrific, juggling, tumbling catch after running all the way to square leg off his own bowling to get rid of Krunal Pandya as Mumbai slipped to 89 for 4. With Tahir trapping Ishan Kishan, it became 101 for 5 in the 15th over.

Pollard then played along, occasionally venting ire at the bowlers, in the company of Hardik Pandya. Both had a good dose of fortune though. Pollard survived on 11 as a charging Chahar could not hold on to a difficult chance off Ravindra Jadeja’s second over, 16th of the innings with the team total reading 104 for 5. Suresh Raina dropped a dolly to let Hardik Pandya off the hook when he was on 4 and the side score 121 for 5 in the 18th over, Thakur being the unlucky bowler. Pandya capitalised on the error by punishing CSK with a helicopter shot that landed in the second tier of the western stands as Mumbai took 16 runs off the over.

Some late drama followed with Pollard being talked to by the umpires after he took stance at the end of the crease to mock an earlier decision to not call a wide after the ball pitched in that region.

However, Mumbai did push in the last five overs, in which they got 47 for the loss of two wickets.