The hosts will fancy their chances against struggling Rajasthan Royals at Wankhede stadium on Saturday. 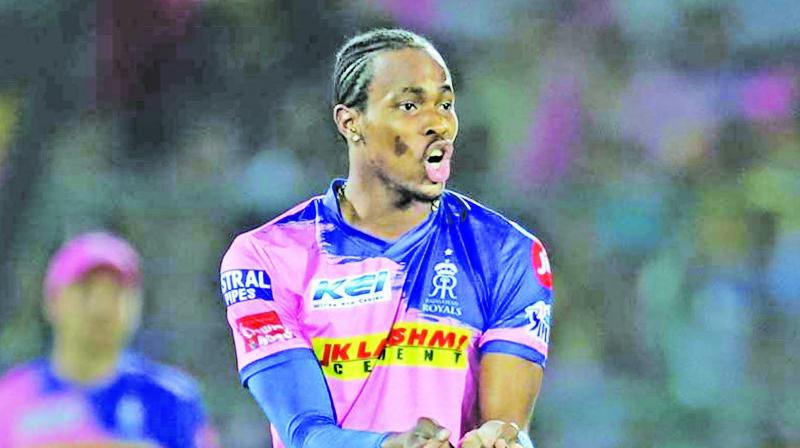 Pacer Jofra Archer has been consistent performer for RR.

Mumbai: Mumbai Indians have always kept their best for the second half of the campaign but having secured four wins already including three back-to-back wins in this edition of IPL they will want to get another win at the half way mark. The hosts will fancy their chances against struggling Rajasthan Royals at Wankhede stadium on Saturday.

The hosts registered convincing wins against Chennai Super Kings and Sunrisers Hyderabad before Kieron Pollard special snatched a thriller from the hands of Kings XI Punjab on Wednesday here. With Pollard finding his range, MI middle order has become destructive with Pandya brothers (Hardik and Krunal) also there.

However, Mumbai Indians top order has shown promise but none of them has gone to score a big one. Skipper Rohit Sharma is available for selection after missing last game due to muscle spasm in right leg. Quinton de Kock and Suryakumar Yadav look in good touch but haven’t been consistent.

In bowling, MI face dilemma on how long to keep experienced Lasith Malinga on the bench. Jason Behrendorff and Alzarri Joseph went for a few in last game but they have made a good start to their debut IPL season. Both have brought winning luck with Joseph making telling contributions in first game with the ball and with the bat in previous game.

The hosts are playing back to back games at home so their might be murmurs to rest Indian premier fast bowler Jasprit Bumrah who has played all the games so far.

Royals in comparison have stuttered and have just one win to show in six games. They came close against CSK on Thursday but couldn’t wrap it up. Royals have some quality batsmen but few of them haven’t been able to come to party. Jos Buttler and Sanju Samson have shown form but skipper Ajinkya Rahane, Steve Smith and Ben Stokes are yet to make it big.

Rahane will find some solace at the Wankhede stadium where the Mumbai boy has played a lot and tips from support staff which includes locals Amol Muzumdar and Sairaj Bahutule will be handy.