It was the second victory in three matches for Mumbai Indians while Sunrisers tasted their first defeat in the 10th edition of the league. 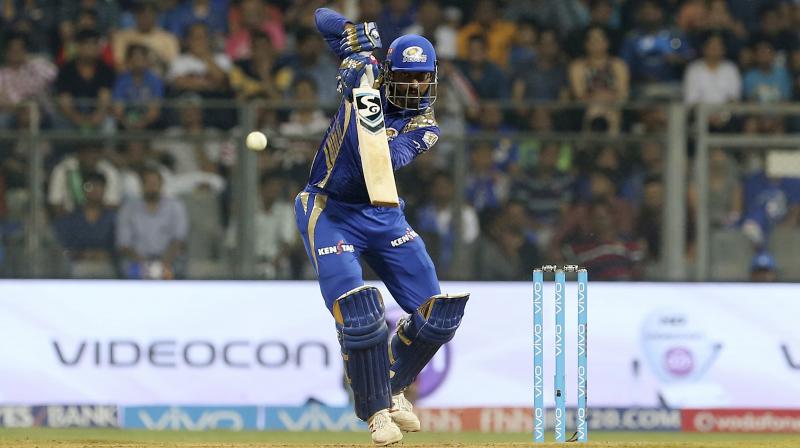 After younger brother Hardik Pandya's pyrotechnics against KKR, it was elder brother Krunal's turn to play a lovely cameo as his 37 off 20 balls was largely instrumental in Mumbai Indians knocking off a tricky target of 159 in overs.

Young Delhi left-hander Nitish Rana once again proved his worth as he anchored the chase with an invaluable 45 off 36 balls with the help of three boundaries and two sixes.

But it was the elder Pandya, who made a mockery of a target that could have been troublesome when Mumbai Indians were reduced to 111 for 4 in the 14th over.

Along with Rana, Krunal added 38 runs in 3.3 overs and Rana's contribution was a single. Krunal hit three fours and three huge sixes -- one each of Ashish Nehra, Ben Cutting and Rashid Khan.

It was the second victory in three matches for Mumbai Indians while Sunrisers tasted their first defeat in the 10th edition of the league.

The target was an easy one but Mumbai did face some challenge and it was young Rashid Khan (1/19 in 4 overs) who bowled an immaculate line on a placid track. His googly fooled an experienced campaigner like MI skipper Rohit Sharma (4).

He bowled 12 dots and conceded a single six in his four over spell in-front of a capacity crowd.

Credit should be given to Rana for hitting Mustafizur Rahaman behind the square for a six and also effortlessly lofted Deepak Hooda's friendly off-break into cow-corner stand.

Warner blasted his way to 49 off 34 balls, with the help of two sixes and seven fours, while his opening partner Dhawan made 48 in 43 balls as the two left-handers put on 81 for the first wicket in just over 10 overs.

Harbhajan, who opened the bowling had fantastic figures of 2/23 in four overs while Bumrah was once again brilliant at the death taking 3/24 in 4 overs.

The visitors innings saw a slump once Warner got dismissed by Harbhajan in the 11th over as wickets fell regularly thereafter with only Ben Cutting (20), from the rest, reaching double figures.

Warner and Dhawan made a cautious start and then accelerated during the later stages. The first two overs from Harbhajan and Malinga yielded just four runs before Sunrisers captain Warner struck the off-spinner for a couple fours on the off-side.

The Powerplay overs produced 34 runs and that too after the Sunrisers skipper hit Malinga behind the wicket for two fours on either side.

The seventh over from McClenaghan was very productive with 15 runs coming off it. With the run-rate picking up, 75 runs were on board after 10 overs but then the visitors lost four wickets in the next five overs to be put on the back-foot.

It took a stunning, full length diving catch by wicket keeper Parthiv Patel after he ran some yards to his left to send back Warner off Harbhajan when the batsman attempted a reverse sweep and provide MI with the breakthrough in the 11th over.

Warner had struck a stunning six off a similar shot to the previous ball from the off-spinner who got his revenge immediately.

The crafty Harbhajan then picked up the wicket of Deepak Hooda (9) in his last over after changing ends as the batsmen went for a slog sweep trying to hit a top-spinner.

McClenaghan got rid of Dhawan in the next over with a near-full toss that the batsman missed and got castled and after 15 overs the visitors were 118 for 3.

When Yuvraj Singh got out cheaply to Hardik Pandya, Mumbai Indians looked well in control with the Sunrisers under check at 123 for 4 in the 16th over. With MI bowlers on top, only 18 runs were scored in the last three overs.