My best is yet to come, says Cheteshwar Pujara 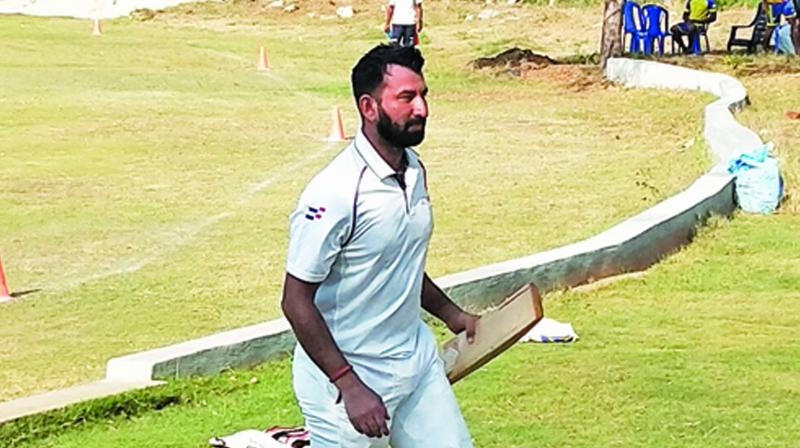 Cheteshwar Pujara walks back to the pavilion after scoring a century on his TNCA first division league debut. (Photo: DC)

Chennai: Away from the hustle and bustle, the VB Nest cricket ground in the outskirts of Chennai presented a tranquil setting for Cheteshwar Pujara to make his debut in the Tamil Nadu Cricket Association first division league on Tuesday.  The quiet probably worked even better for the studious run machine Pujara as he slammed 163 for the R. Ashwin-led Mylapore Recreation Club.

TNCA allows two outstation players to feature in a side. Knowing the stature of the league, Pujara didn’t think twice when Ashwin came up with a request. “The main reason is to get some match practice and be in touch with the game. I have been hearing good things about the league from Saurashtra and Karnataka players. Ashwin also said it is an important game for the team. Before an international match or first-class season, sometimes you need match practice, so this is the right platform for some games,” said Pujara.

“After a long season, I have been trying to manage my workload. When you are playing good cricket, you need to play an odd match and then take a few steps forward,” added the Saurashtra batsman.

Amassing 521 runs including three centuries, Pujara was the chief architect in India’s historic triumph Down Under. He faced a staggering 1,258 balls in the four-match series. Pujara said the 2018-19 season helped him gain a lot of confidence, but insisted that his peak form was yet to come.  “There have been instances where I have played some exceptional innings in domestic cricket and want to replicate that in international cricket as well. Australia was a prime example. After the success Down Under, I have realised my game even better. I have been scoring runs but there was a phase when I didn’t score much in Test cricket," said Pujara.

“Sometimes it is difficult to accept things but I am someone who moves on.  I am not worried about what people think. But the perception is changing now. I think IPL franchisees will also realise that soon. If I can repeat such performances, I can be a good T20 player. At the same time, my priority will always be Test cricket. Whenever I have free time and whenever there is an opportunity to play shorter format, I would like to play,” he said.