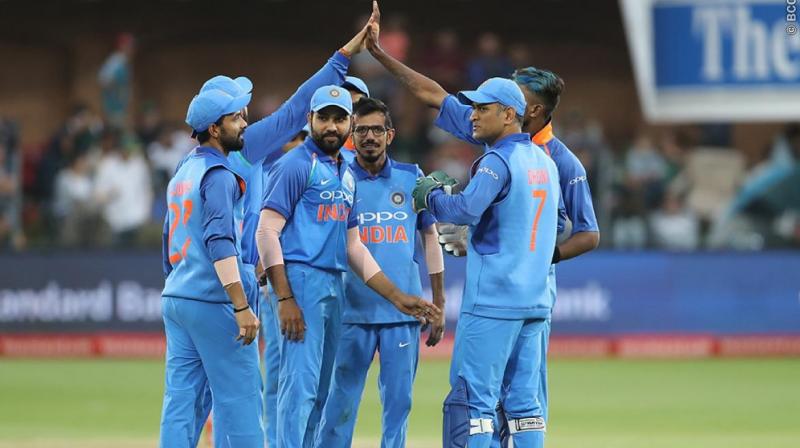 Port Elizabeth: Virat Kohli-led India completed a historic series win over South Africa on Tuesday as they defeated the hosts by 73 runs in the fifth ODI to clinch the series 4-1 with one game to play.

After winning the toss, the hosts elected to bowl first. Despite getting an earlier wicket of Shikhar Dhawan, a 105-run partnership between Virat Kohli and Rohit Sharma took the visitors back on track. Eventually, it was Rohit Sharma’s 115 which took India to 274-7.

In reply, Aiden Markram departed after putting up a 50-run partnership with Hashim Amla. Following his wicket, JP Duminy and David Miller followed his footsteps back to the pavilion. Hashim Amla’s 71 and Heinrich Klaasen’s 39 were the only takeaways for the hosts, soon after which they collapsed for 201.

For India, Kuldeep Yadav was once again the star with the ball, finishing with a spell of 4-57. Apart from him, Hardik Pandya, Jasprit Bumrah and Yuzvendra Chahal were the other wicket-takers.

The final ODI of the series will be played on Friday at Centurion.

WICKET! Andile Phehlukwayo has departed for a duck as South Africa's woes continue. Kuldeep Yadav made no mistake in removing the Proteas batsman.

WICKET! Hashim Amla has been run-out by Hardik Pandya, and has to walk back to the pavilion after scoring 71. This is a huge turning point in the game.

WICKET! Yuzvendra Chahal has done the trick for India, as he removes David Miller, who was looking in good touch.

WICKET! Yuzvendra Chahal has done the trick for India, as he removes David Miller, who was looking in good touch.

The hosts have gone past the century-run mark, with Hashim Amla and David Miller having put up a 37-run partnership so far.

WICKET! Hardik Pandya does the damage again, as he removes dangerman AB de Villiers courtesy a catch by MS Dhoni. India are right back in the game.

WICKET! Hardik Pandya strikes this time, as Rohit Sharma makes no mistake to take catch at the slip position to dismiss JP Duminy.

WICKET | Pandya get's the wicket of Duminy (1) who is caught behind in the second slip position by Sharma. SA 55/2 #SAvIND #MomentumODI

Openers Aiden Markram and Hashim Amla have got off to a strong start in the Proteas' run chase of 274. Will the visitors find a breakthrough?

Rohit Sharma’s hard-fought knock of 115 took India to 274-7 from their 50 overs during the fifth ODI against South Africa here on Tuesday.

After winning the toss, South Africa put India to bat. Shikhar Dhawan (34 runs) was the first to depart, but Rohit Sharma and Virat Kohli put up a 105-run partnership for the fourth wicket. The Indian captain’s life at the field with the bat was short-lived as he departed for 36.

Lungi Ngidi was the key bowler for South Africa as he finished his spell with four wickets. After removing Rohit Sharma in the second ball of the 43rd over, he removed Hardik Pandya for a golden duck in the very next ball.

South Africa will hope to chase down the total and stay alive in the series, when they come out to bat.

WICKET! Lungi Ngidi is on fire, as he gets his third wicket by removing Shreyas Iyer.

WICKET! Lungi Ngidi has just removed Hardik Pandya, who departs for a golden duck. India are in trouble now.

WICKET | Another wicket for Ngidi and it's that of Pandya who is out for a golden duck. India 236/5 pic.twitter.com/iexOShzFl7

HUNDRED! Rohit Sharma gets to his 17th ODI hundred at a much-needed time for India. How long will his partnership with Shreyas Iyer last?

💯! Hitman celebrates as he brings up his 17th ODI ton

WICKET! Ajinkya Rahane is dismissed for eight runs, as he is run-out.

HUNDRED! Rohit Sharma gets to his 17th ODI hundred at a much-needed time for India. How long will his partnership with Shreyas Iyer last?

💯! Hitman celebrates as he brings up his 17th ODI ton

WICKET! Ajinkya Rahane is dismissed for eight runs, as he is run-out.

WICKET! South Africa have got the big wicket of Virat Kohli, who is run-out for 36.

FIFTY! Rohit Sharma has scored his 35th ODI fifty as he returns back to form. Will he score a hundred today?

Virat Kohli and Rohit Sharma have put up a 42-run partnership so far to take the visitors closer to the century mark.

Rohit Sharma and Shikhar Dhawan have got India off to a good start. However, Morne Morkel has been the key man for Proteas so far, having got two maidens and conceding just four runs.

Aiden Markram won the toss and elected to bowl in the fifth ODI against India on Tuesday.

The hosts have made one change, as Tabraiz Shamsi replaces Chris Morris.

Meanwhile, India have gone unchanged for this match.

Here is the playing XI for both the teams:

Having tasted their first ODI series defeat in Johannesburg, India will aim to seal the six-match ODI series when they lock horns with South Africa in the fifth ODI of the Momentum Series at St George's Park in Port Elizabeth on Tuesday.

Virat Kohli and co started the series in fine fashion, securing dominant victories in the first three contests at Durban, Centurion and Cape Town respectively to take their tally to 3-0. However, the hosts bounced back by winning the rain-affected and lightning-struck Pink ODI in Johannesburg through the Duckworth-Lewis method by five wickets.

The Men in Blue will now look forward to learning from their mistakes and make history in the African continent. A victory at Port Elizabeth will see India clinch their first ODI series in South Africa.

It will be intriguing to see how Kuldeep Yadav and Yuzvendra Chahal tackle the Proteas batting-line up, who countered the Indian spin duo with ease in the last match.

The visitors do not have a great record at the venue, having lost all five ODIs they have played since 1992. Kohli is likely to go with the same playing XI, as Kedar Jadhav continues to struggle with a hamstring injury.

Aiden Markram’s side, meanwhile, will be brooding with confidence having kept the series alive. With AB de Villiers back in the squad, the hosts will aim to keep the momentum going and tie the series.

Where to watch the match live?