The 32-year-old all-rounder in the first T20I against India played a gutsy knock of 68, which enabled Windies to score 207 runs in 20 overs. 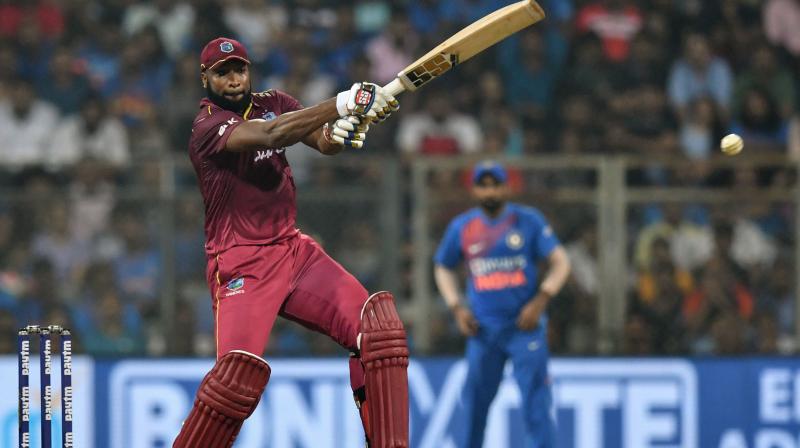 West Indies skipper Kieron Pollard has completed 1,000 runs in the T20I on Wednesday. Pollard became the fourth Windies batsman to achieve the feat. He completed the milestone when he completed his 10th run in the ongoing innings. (Photo:AFP)

Pollard became the fourth Windies batsman to achieve the feat. He completed the milestone when he completed his 10th run in the ongoing innings.

The 32-year-old all-rounder in the first T20I against India played a gutsy knock. His late onslaught enabled West Indies to score 207 runs in 20 overs. In the second T20I, he did not have the opportunity to bat as Windies won by eight wickets.

Chasing 241, West Indies got off to the worst start possible as they lost their opener Brandon King (5) in the second over of the innings. Five runs later, Mohammad Shami sent Lendl Simmons (7) back to the pavilion, reducing West Indies to 17/2.

Next, Deepak Chahar got among the wicket-taking charts as he sent back Nicholas Pooran (0) in the fourth over and West Indies were left staring down the barrel.

Skipper Kieron Pollard next came out to bat, and he along with Shimron Hetmyer retrieved the innings for the visitors. The duo put on 74 runs for the fourth wicket, but their resistance was finally ended by Kuldeep Yadav in the 10th over as he dismissed Hetmyer (41), reducing Windies to 91/4.

Earlier, KL Rahul and Rohit Sharma's knocks of 91 and 71 respectively enabled India to post a score of 240/3 in the allotted twenty overs.

Openers Rohit and Rahul provided a quickfire start to India as they put on 72 runs in the opening six overs. Rohit also went on to register his 400th international six in the match.

Sharma continued to wreak havoc on Windies' bowlers and as a result of his efforts, India brought up a score of 100 in just eight overs. The right-handed Sharma also went past the 50-run mark in just 22 balls.

In the 10th over, Rahul brought up his consecutive fourth half-century in the shortest format of the game. West Indies finally got the breakthrough in the 12th over as Kesrick Williams dismissed Rohit (71).

Rishabh Pant (0) once again failed to leave a mark as he was sent back to the pavilion by Windies skipper Kieron Pollard, reducing India to 138/2.

Skipper Virat Kohli next came out to bat and he along with Rahul ensured that the side keeps on scoring runs at a steady pace.

Kohli batted in an aggressive manner throughout and as a result, he brought up his half-century of just 21 balls.

Sheldon Cottrell dismissed Rahul (91) in the final over innings, but India managed to go past the 240-run mark in the allotted twenty overs. Kohli remained unbeaten on 70 runs off just 29 balls.