Hosts on brink of series victory against England after collective effort on fourth day. 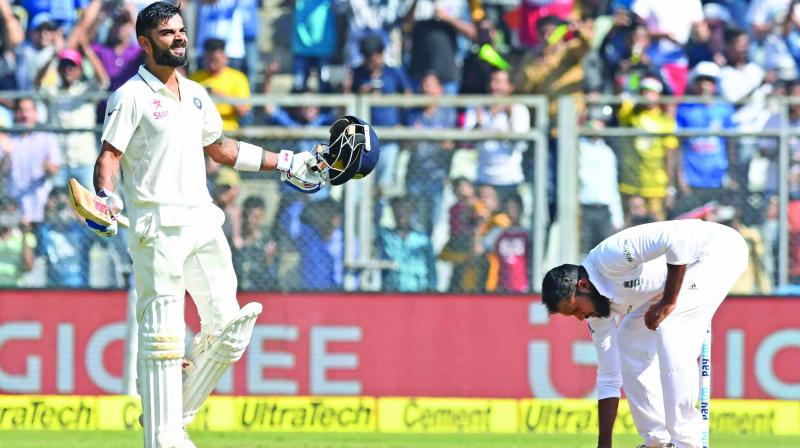 India skipper Virat Kohli celebrates his double century on the fourth day of the fourth Test against England in Mumbai on Sunday. (Photo: Rajesh Jadhav)

Mumbai: After Virat Kohli (235) and Jayant Yadav (104) virtually knocked England out of the contest, bowlers tightened India’s grip on the fourth Test here on Sunday. Alastair Cook-led side, who is 182/6, now faces an uphill task to stop Virat Kohli-led India from clinching the series.

While England had harboured hopes of restricting India’s lead on Day 4, they lost the plot after Kohli and Jayant added 128 runs in the first session. The duo’s 241-stand helped India secure 231-run lead.

Kohli, who is breaking records and reaching milestones for fun these days, added another feather in his cap after he became the first Indian captain to score three double hundreds in a calendar year. The indomitable right-hander, who now has 640 runs against his name in the ongoing Test series, also became the highest Indian run-getter in a bilateral series against England, bettering Rahul Dravid’s 602-run tally in 2002.

On a day when Kohli remained the talking point, Jayant, playing his 3rd Test, once again proved why he is India’s find of the series, with a maiden international hundred. The Haryana all-rounder, who had chipped in with crucial runs in Vizag and Mohali, became the first Indian and only the second international cricketer to score a ton batting at no. 9.

England’s hopes of a comeback were dashed in the first over after Bhuvneshwar Kumar trapped Keaton Jennings (0), a centurion in the first innings, before the wickets. Ravindra Jadeja came to the party as he sent packing Cook (18) and Moeen Ali (0) in quick succession. England were tottering at 49/3 at the Tea interval.  However, Joe Root (77) and Jonny Bairstow (50 not out) stopped the free flow of wickets with a 92-run partnership.

But as it had been the case throughout the series, India won the final session of day’s play after scalping three England wickets. While Jayant got out Root LBW, R. Ashwin dismissed Ben Stokes (18) and night-watchman Jake Ball (2) as India moved closer to their first series win over England after losing the previous three bilateral series.