Mumbai made to toil hard in historic 500th Ranji game 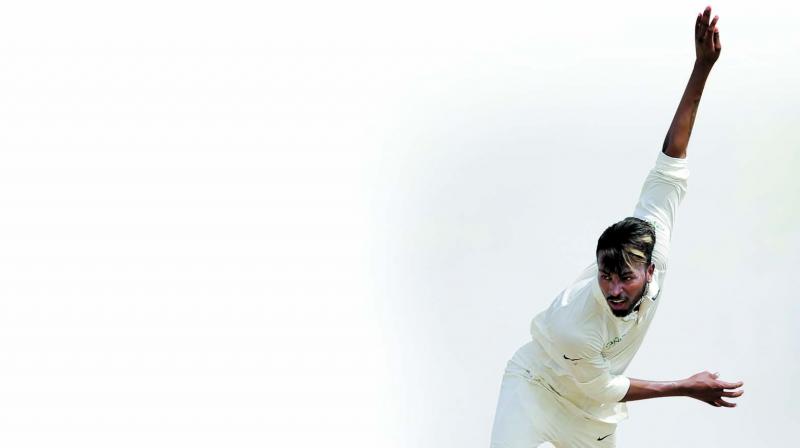 The visitors were eight down at lunch and carried on to pile up 575/9 declared after a 109-run ninth wicket partnership.

Mumbai were made to toil hard in their historic 500th Ranji Trophy game by Baroda at Wankhede stadium. The visitors, who had an ordinary start to the campaign and came here without the Pathan brothers (Irfan and Yusuf) and the Pandya brothers (Hardik and Krunal) flattenned the 41-time Ranji Trophy champions in their own den.

It was pacers Atit Sheth and Lukman Meriwala who snared five wickets each to bowl out a strong Mumbai batting side for a paltry 171 in the first two sessions of the opening day. But Baroda knew that Mumbai, having experienced pacers Dhawal Kulkarni and Shardul Thakur, would come hard at them. It needed a massive batting effort from them on a lively wicket that had a tinge of grass on the first day.

Left-handed opener Aditya Waghmode did just what his team wanted. The 28-year-old, who had an ordinary showing in the first three games, spoiled Mumbai’s party by slamming 138 in 309 balls with 13 boundaries and a six in his 492-minute stay at the crease. Aditya added 140 with skipper Deepak Hooda (75) for the third wicket and 105 with Swapnil Singh for the fourth wicket. Swapnil, who was overnight unbeaten on 63, carried on to top score with 164 runs (309b, 405 min) on Saturday. He struck 10 boundaries and four sixes in his whirlwind knock to bat Mumbai out of the match.

The visitors were eight down at lunch and carried on to pile up 575/9 declared after a 109-run ninth wicket partnership.

“This is my best ever knock among my six first-class tons because it came against Mumbai at Wankhede,” Aditya said. He tired up the Mumbai bowlers by seeing off the first day’s final session playing 88 balls for 15 runs to negate the threat. It was newcomer Royston Dias who looked more threatening than Kulkarni and Thakur on Day one’s final session. The left-arm pacer dismissed Noor Pathan after he almost had Aditya, only to be dropped by Shreyas Iyer at third slip.

Aditya saw off the day along with Vishnu Solanki. Mumbai still fancied their chances to show up the next day morning and restrict Baroda to a manageable score.

However, Aditya grafted his way again to see off the morning hour with caution and then played his shots despite losing Solanki. Mumbai lost Dias early on second day as he twisted his ankle in his second over of the day and never came back to bowl. “I was trying to occupy the crease and consumed many balls on the first day. On Friday, I had a clear plan and after 30-45 minutes in the morning session, I decided to play my shots. They lost Royston Dias, which helped us,” he said.

Aditya had a more aggressive partner in Hooda, who slammed five sixes in his 113-ball 75. Aditya later found an ideal partner in Swapnil to take the lead close to 200. He was eventually out to part-timer Shreyas Iyer.

Aditya, who has been working in the Income Tax department for four years in Pune, knew the Mumbai bowlers well and did everything he could to defy them. He even saw a testing spell from Thakur where he was pitching it short on the seam and generating some movement. Aditya, who is on the shorter side, ducked, looked ugly and was even hit on the helmet but hung on to play a marathon innings.

“That was a testing spell from Shardul but we did well to survive. Against Iyer it was a driving ball but I tried to nudge it to third man for a single, which was my mistake and I paid for it,” he said.

Spirits were down at the end of the second day in the Mumbai camp and Swapnil piled on more misery on the Mumbai bowlers on Saturday. He reached his maiden first-class hundred in 242 balls with a clip to the leg side off Vijay Gohil just before lunch. Even though he lost three partners he carried on with Sagar Mangalorkar (43 not out) in the second session to keep Mumbai on the field for six sessions. Mumbai will now have to bat well on Sunday to avoid outright defeat.

At stumps on Day 3, Mumbai were struggling at 102/4. Prithvi Shaw made 56 while Rahane was batting on 28 along with Surya-kumar Yadav (2).