Ajinkya Rahane and Virat Kohli got out early in the first session of day 4 of the first India vs England Test. 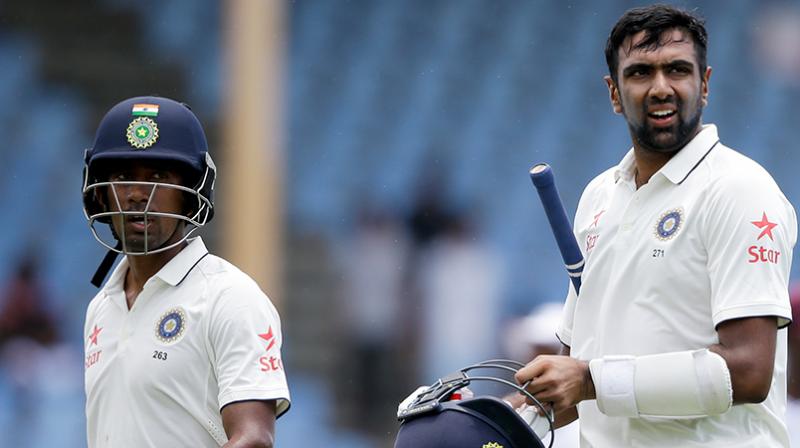 Ravichandran Ashwin and Wriddhiman Saha steadied the rocking boat with an unfinished stand of 50 in 105 balls in the first session on day four. (Photo: AP)

Rajkot: India lost the wickets of captain Virat Kohli and another top batsman Ajinkya Rahane in quick succession before they recovered to reach 411 for six in their first innings at lunch on day four of the first cricket Test against England here on Saturday.

Kohli was out for 40, becoming the first Indian skipper in over 65 years to be dismissed hit-wicket, while Rahane (13) was sent back cheaply before Ravichandran Ashwin and Wriddhiman Saha steadied the rocking boat with an unfinished stand of 50 in 105 balls.

At the lunch break lunch, Ashwin was batting on 29, after facing 50 balls, while wicketkeeper Saha was also not out on 29 after a 69-minute stint.

India are still 126 runs behind England's huge first innings total of 537. The home team added 92 runs in the first session in 98.3 overs after starting the day at 319 for four.

With just five sessions left in the game and not even the first innings of both teams having concluded, the match looked headed for a tame draw.

India had lost two wickets in four balls to spin bowling last evening and this morning they again lost two more in quick succession to the slow bowlers after playing out the first half hour against the fast bowlers.

Both Rahane and Kohli were out to pull shots on a wicket where the odd ball had started turning and jumping from the footmarks or widening cracks.

Rahane, who joined Kohli straightaway this morning after India had lost night watchman Amit Mishra to the third ball of the day, was out when he misread a straight ball from left-arm spinner Zafar Ansari. He tried to pull off the backfoot and the ball hit the top of the middle stump.

It was the first big blow of the day and an even bigger one followed when Kohli, who looked well-set and had eschewed risky shots, went back to pull the ball from leggie Adil Rashid but trod on his wicket as his left leg touched the base of the stump and disturbed the bails.

Kohli this became the second Indian captain to get out hit-wicket after Lala Amarnath in 1948-49 at the Chepauk in Chennai against Trevor Goddard's West Indies.

The two huge wickets fell within 15 minutes and in the space of 17 balls and India slumped to 361 for six. This put enormous pressure on Ashwin and Saha to take India to safer shores.

Ashwin started confidently with a back-foot square cut for four off Ansari and England, in their eagerness to get another wicket, also wasted a DRS call when the tall batsman had played Rashid with the bat.

Ashwin has faced 50 balls so far in which he has stroked two fours.

Saha, at the other end, lived dangerously as he edged newly introduced bowler Ben Stones perilously close to the right glove of a diving England wicketkeeper Jonny Bairstow early in his innings.

He was comfortable against the spinners and even stepped out of crease to loft Rashid for a six over the straight field. He has also struck one six and one four in his 66-ball stay till lunch.