Ind vs Eng, 1st Test: England in command but match heads for a draw 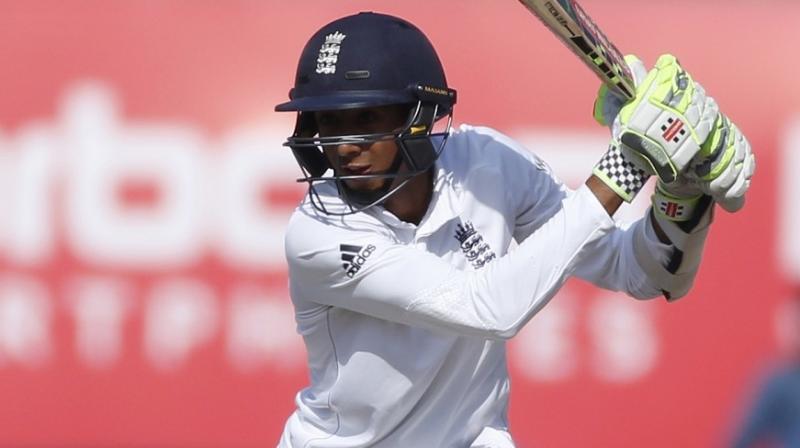 Haseeb Hameed, who was unbeaten on 62, batted confidently, hitting five fours and a six during his 141-minute stay at the wicket. (Photo: AP)

Rajkot: Teenage debutant Haseeb Hameed struck his maiden half-century as England took firm control on the fourth day of the first Test against India in Rajkot on Saturday.

Hameed was unbeaten on 62 with skipper Alastair Cook on 46, the duo taking England's lead to 163 at the Saurashtra Cricket Association ground, hosting its first Test ever.

With three sessions to go on a batsman-friendly wicket, England put themselves in a position to dictate terms to their top-ranked rivals.

Hameed, watched by his Indian-born father in the stands, batted confidently, hitting five fours and a six during his 141-minute stay at the wicket.

The home side owed much to Ravichandran Ashwin, who struck a crucial half-century to restrict India's first-innings deficit to 49 runs.

Adil Rashid took 4-114 to emerge as the most successful bowler while his spin partner Zafar Ansari picked 2-77.

Ashwin shepherded the tail to frustrate the visitors who posted 537 in their first knock, their third highest total in the country, thanks to centuries from Joe Root, Moeen Ali and Ben Stokes.

Ashwin completed his seventh Test half-century in the process, underlining once again his all-round skills.

When England last toured India in 2012, Ashwin had proved to be a thorn in their flesh, averaging over 60 with the bat.

It was also the last time that a visiting team took a first-innings lead in a Test in India.

Ashwin hit Rashid for a delectable boundary before Mohammed Shami added some entertainment to the otherwise dour proceedings with a huge six in the same over.

Local hero Ravindra Jadeja (12) ballooned a simple catch to Hameed off Rashid while Umesh Yadav (five) was brilliantly caught by a diving Ben Stokes off the same bowler.

The morning session saw India losing in-form skipper Virat Kohli to a freak dismissal when the batsman was on 40.

Kohli's back leg hit the stumps and dislodged a bail as he tried to pull away a short delivery from Rashid.

He became the second Indian skipper to be hit-wicket after Lala Amarnath in the 1948-49 series at home against the West Indies.

The Indian skipper was also out in a similar fashion in a one-day international against England in Cardiff in 2011.

India, 319-4 overnight, started the day cautiously with Kohli and Ajinkya Rahane (13) not taking any unnecessary risks against a disciplined England attack.

But they were quick to latch on to poor deliveries with Rahane imperiously pulling a short ball from Chris Woakes to the square leg fence.

Rahane's flourish, however, proved short-lived as he lost his stumps to Ansari after completely misjudging the length.

But it was the dismissal of Kohli who has scored two Test double centuries this year which hit India the hardest.

The otherwise prolific Kohli had been keen to improve his dismal average against England but failed to build on his good start. He hit five fours in his 95-ball knock.

The home team have won 12 and drawn one of their last 13 Tests at home since England's historic 2-1 triumph in India in 2012.