Why Rohit Sharma has failed to leave a mark in Test cricket?

The top scorer of the 2019 Cricket World Cup hasn’t been a regular part of the Test squad since 2018 December. 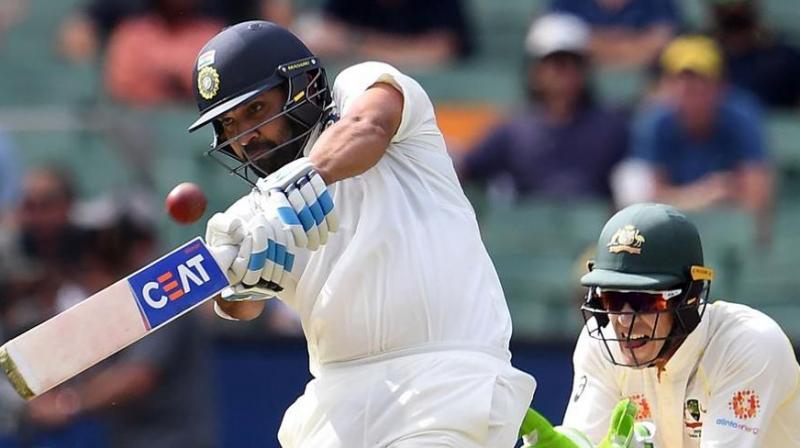 Rohit Sharma, who recently amassed 648 runs in the 2019 World Cup, may well be the best hitter of the white ball, but the same can’t be said, when it comes to the longest format of the game. (Photo:AFP)

Mumbai: Rohit Sharma, who recently amassed 648 runs in the 2019 World Cup, may well be the best hitter of the white ball, but the same can’t be said, when it comes to the longest format of the game.

The top scorer of the 2019 Cricket World Cup hasn’t been a regular part of the Test squad since 2018 December. The last time the right-handed southpaw managed to score a top knock was during India’s tour of Australia.

However, his best innings came against West Indies, during India’s home series in what was Sachin Tendulkar’s farewell series. During that series only, the Mumbai Indians captain managed to notch up a career best 177, followed by another knock of 111.

Rohit debuted during Sachin’s farewell series in 2013. And, following his top knocks against West Indies, the selectors thought of considering him for the Test squad.

However, due to his inefficiency to convert starts into potential big knocks at the big stage, the selectors dropped the white-ball vice captain from the Test squad.

Despite amassing 288 runs during the West Indies series, the selectors have overlooked the hitman in the Test format. Currently, the Rohit is in his best form of his life, especially after having amassed 648 runs in the recently concluded 2019 World Cup.

But, when it comes to the longer format, the cricketing legends were split on his inclusion in the Test squad as an opener.

Despite proving his worth in the limited-overs format, here are few reasons why Rohit Sharma might not be a good fit in the Test squad as an opener:-

1. Poor technique against the swinging ball

For the last years, the Test Openers have failed to do their job – be it KL Rahul, Rohit Sharma or anybody else. Even the number three and four have failed to prove their justice to the slots.

The last two years have been miserable for the top four as they recorded the lowest average opening partnerships in a year. This indicates that the openers have failed to perform against the new ball.

During the 2019 World Cup in England, we saw that Rohit Sharma looked susceptible against the swinging white ball and it won’t be a surprise to see the white ball opener struggle against the red ball too.

The red balls in the overseas, especially the Duke balls, provide more swing in comparison to the white balls.

Rohit has the tendency to swing his bat hard at the ball and play away from his body, and that proved to be detrimental to his game in the Tests.

Recently, India has started to come up with new and exciting young talents, who have performed superbly in the domestic circuit at each level of the game, but are yet to be rewarded for their hard work.

Currently, many exciting young talents have been found in the domestic first class matches and it would be unfair to overlook them. Players like Priyank Panchal, Abhimanyu Easwaran, have worked hard enough to earn a Test call for the opening slot.

And, if the selectors keep giving the struggling opener chances after chances, it would prove to be harsh for the deserving candidates who performed well for India A or at the domestic level.

However, it remains to be seen if the selectors pick Rohit Sharma for the Test squad for the home series versus South Africa since KL Rahul hasn’t been performing well in the Tests since the 2018 England tour in which he scored a career best 199.