Kohli, Bumrah likely to be rested for West Indies tour 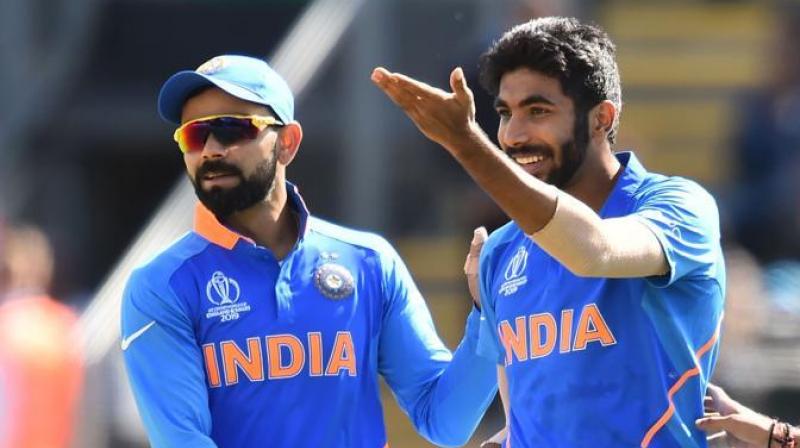 The Men in Blue are scheduled to arrive in India on July 14 after suffering defeat against New Zealand in semi-finals of World Cup 2019. (Photo: AFP)

Mumbai: Indian skipper Virat Kohli and pacer Jasprit Bumrah are likely to be rested for the entire West Indies series starting August 3. India is scheduled to play three T20 Internationals, three ODIs and two Tests against the Caribbean side.

Kohli and Bumrah have been playing continuously for the past one year and in order to save their two best players for the long home season ahead, the selectors want to give them a break.

The Men in Blue are scheduled to arrive in India on July 14 after suffering defeat against New Zealand in semi-finals of ICC World Cup 2019. The senior national committee is expected to meet soon thereafter to choose the squad for West Indies tour.

“Kohli and Bumrah are going to miss the T20s and ODIs for sure but the selectors are also thinking to rest them for the two Tests in the West Indies. They are important players for the team and the team management and selection committee wants them to stay fresh for the home season ahead. They have already had a hectic season in the past one year,” sources in the BCCI informed.

There is no news regarding Dhoni's possible inclusion in the squad for West Indies tour. The 38-year-old has been criticized lately, for his inefficiency to score quickly in death overs. MSK Prasad will be speaking to the team management before the selection of the squad.