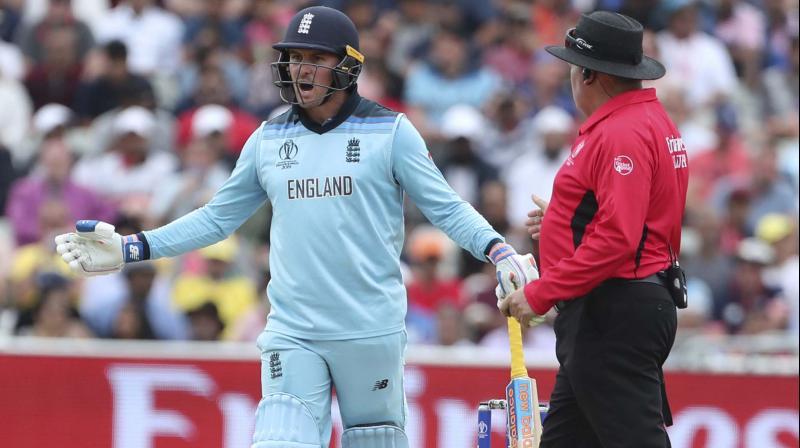 Roy, who had struck a magnificent 85 in 65 balls, was given out caught behind off Pat Cummins, although television replays showed the ball had not touched his bat or glove. (Photo: AP)

Birmingham: England batsman Jason Roy has avoided a potential ban for the World Cup final after protesting about his dismissal during Thursday’s victory over Australia.

Roy, who had struck a magnificent 85 in 65 balls, was given out caught behind off Pat Cummins, although television replays showed the ball had not touched his bat or glove as he attempted a pull shot.

The England opener stood his ground and remonstrated with South African umpire Marais Erasmus. England had used their review appeals by that stage of the semi-final.

With Roy having gained one demerit point already in the tournament, he risked a one-match ban, for Sunday’s final, if he was handed three points and reached the four-point limit.

But in a statement, the International Cricket Council said he had been given only two points and a fine of 30 percent of his match fee.

“Roy admitted the offence and accepted the sanction proposed by match referee Ranjan Madugalle and as such, there was no need for a formal hearing,” the ICC said.

Roy has formed a formidable opening partnership with Jonny Bairstow, the pair sharing century stands in the last four matches they have started together.