'We put men on the moon, so why can't we have a reserve day in WC': Bangladesh coach

After two defeats, Bangladesh were looking for resurgence against Sri Lanka and now they will be wary of their semifinal chances. 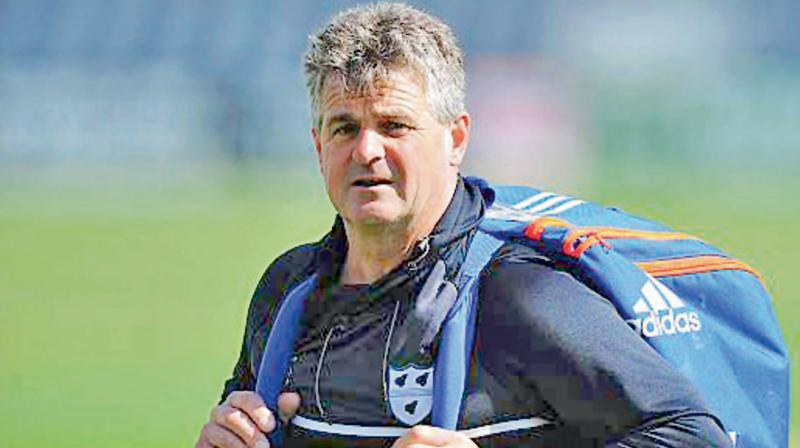 Rhodes, meanwhile, exuded confidence that star all-rounder Shakib al Hasan would regain his fitness and play against West Indies in their next World Cup match.

Bristol: Bangladesh coach Steve Rhodes Tuesday called for the inclusion of reserve days in the World Cup schedule after Bangladesh were forced to split points with Sri Lanka following the abandonment of their match due to persistent rain here.

"We put men on the moon, so why can't we have a reserve day, when actually this tournament is a long tournament," Rhodes said at the press conference.

This was the third match to be washed out in the last five days, the most in the history of World Cup, exceeding the two games at the 1992 edition in Australia and New Zealand, and the 2003 event which was co-hosted by South Africa, Zimbabwe and Kenya.

Rhodes said there is enough gap to fit in reserve days as most teams at least have "two to three days" between matches.

Bangladesh will next play West Indies in Taunton after a five-day gap.

"The games are spread out. I would say that it's disappointing for the crowd, as well. They have got tickets to see a game of cricket, and you know it would be up to them if they can get there the day after," Rhodes said.

After two defeats, Bangladesh were looking for resurgence against Sri Lanka and now they will be wary of their semifinal chances.

"We really felt we targeted that sort of game as two points. I know Sri Lanka would have fought very hard and they are no pushovers at all," Rhodes said.

"But realistically what can we do about it? Absolutely nothing. And now all we can do is win our games coming up one at a time and just think of that."

For Sri Lanka, it was the second successive time that they were forced to share points. The Island nation's last game against Pakistan was also a washed out.

"If they could put a reserve day it would have been fine. But it's a major tournament and we're all playing nine games. I don't know if they can keep a reserve day for us," he said.

"The next day you have to travel to a different venue, so it's not easy. If they can put a reserve day, though, it's going to be good for all the spectators and everyone."

Rhodes, meanwhile, exuded confidence that star all-rounder Shakib al Hasan would regain his fitness and play against West Indies in their next World Cup match at Taunton on Monday.

Shakib, who scored two fifties and a hundred to be the tournament's leading run scorer, sustained a thigh strain during the England game last Friday.

"He picked up a little injury as you all know in that game against England and he fought on and battled on and played extremely well with an injury," he said.

"We're very, very optimistic that the treatment he will get this week and the way he can recover well that he can play in that next game against the West Indies.