The game between India and New Zealand in Nottingham is threatened by cloud cover and it is not even a fortnight into the tournament. 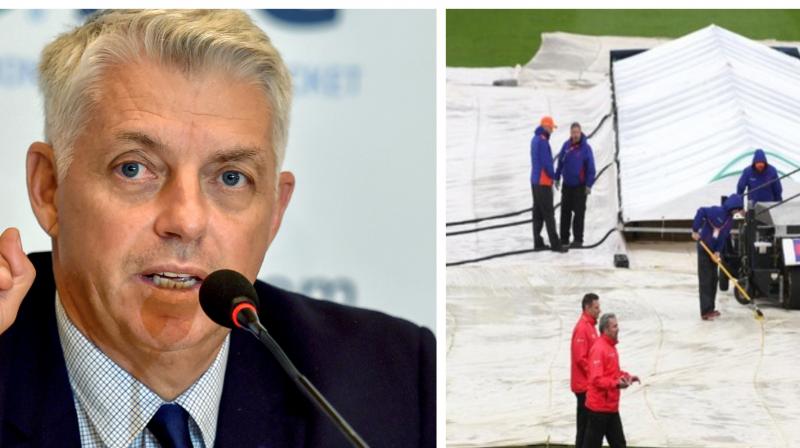 Two Sri Lanka games, against Pakistan and Bangladesh in Bristol have been abandoned without a ball being bowled. (Photo: PTI)

Nottingham: Three rained out games and more feared, the ongoing World Cup does seem to be a bit under the weather but the International Cricket Council says there's hardly anything it can do to deal with the "extremely unseasonable" cloud cover in the country right now.

Two Sri Lanka games, against Pakistan and Bangladesh in Bristol have been abandoned without a ball being bowled.

The other game between South Africa and West Indies in Southampton was called off after 7.3 overs, leading to calls for a reserve day.

The game between India and New Zealand in Nottingham is threatened by cloud cover and it is not even a fortnight into the tournament, which began on May 30 and concludes on July 14.

The sport's governing body says it couldn't have possibly gone for reserve days given the long schedule of the event.

"Factoring in a reserve day for every match at the World Cup would significantly increase the length of the tournament and practically would be extremely complex to deliver," ICC's outgoing Chief Executive Dave Richardson said in a statement.

As per the Met department's report, the United Kingdom is experiencing twice the average rainfall in June.

"This is extremely unseasonable weather. In the last couple of days we have experienced more than twice the average monthly rainfall for June which is usually the third driest month in the UK," Richardson said.

"In 2018, there was just 2 mm of rain in June but the last 24 hours alone has seen around 100mm fall in the south-east of England," said the former South Africa wicketkeeper.

He then went on to explain the impact a reserve day could have on the tournament.

"It would impact pitch preparation, team recovery and travel days, accommodation and venue availability, tournament staffing, volunteer and match officials' availability, broadcast logistics and very importantly the spectators who in some instances have travelled hours to be at the game.

"There is also no guarantee that the reserve day would be free from rain either," said Richardson.

The abandoned matches could impact a team's position on the points table during the business end of the tournament.

But having a reserve day for each match will require a significant increase in the workforce from the current 1200 that is employed per game.

"We have reserve days factored in for the knock-out stages, knowing that over the course of 45 group games we should play the large majority.

"When a match is affected by weather conditions, the venue team works closely with Match Officials and Ground Staff to ensure that we have the best possible opportunity to play cricket, even if it is a reduced overs game."

For Bangladesh coach Steve Rhodes, the match against Sri Lanka being called off was indeed frustrating as they had a real chance of victory against the below-par former champions.

"Very frustrating. We really targeted this sort of game as two points, and I know that Sri Lanka would have fought very hard and no pushovers at all. But we do see it as one point lost, and that's disappointing, but realistically, what can we do about it? Absolutely nothing," Rhodes said.

But South Africa skipper Faf du Plessis was not complaining after the abandoned match against the West Indies as it helped his side get off the mark on the points table.

"The horse is out of the shed if that's the right wording...The further the game goes, the closer to a T20 game, being two down already, the odds are heavily in their favour.

"So, as it got a bit later in the day, then you would rather get the point and go," du Plessis said after the match was abandoned.