ICC CWC’19: ‘Factoring in reserve days would be extremely complex to deliver’: ICC

On June 7, the match between Pakistan and Sri Lanka was called off due to inclement weather. 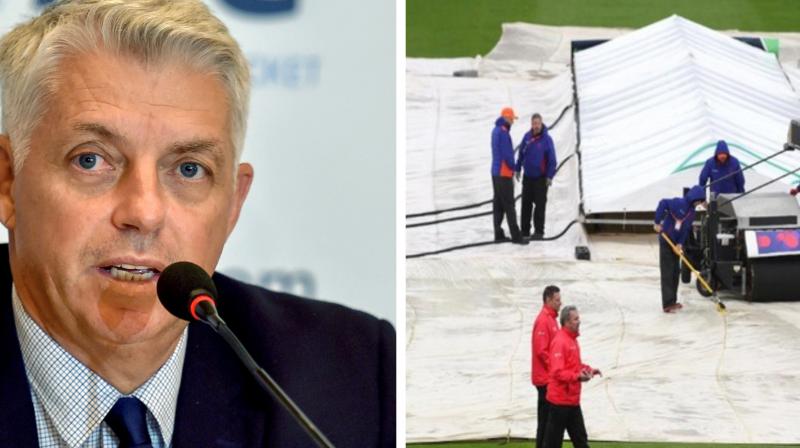 Several teams have criticised the ICC for not keeping reserve days for every match in the league after three games were washed out, the most ever recorded in a single World Cup tournament. (Photo: PTI/ ICC twitter)

London: The International Cricket Council (ICC) on Tuesday said that factoring in reserve days would increase the length of the ongoing World Cup and would pose logistical issues, despite rain playing spoilsport for the second consecutive day in the tournament.

"Factoring in a reserve day for every match at the ICC Men's Cricket World Cup would significantly increase the length of the tournament and practically would be extremely complex to deliver," outgoing ICC Chief Executive David Richardson said in a statement.

Several teams have criticised the ICC for not keeping reserve days for every match in the league after three games were washed out, the most ever recorded in a single World Cup tournament.

On June 7, the match between Pakistan and Sri Lanka was called off due to inclement weather.

On Monday, the South Africa-West Indies tie was also abandoned without a single ball being bowled. The tie between Sri Lanka and Bangladesh too saw no result on Tuesday due to the relentless rains.

Defending the no-reserve day policy in this year's World Cup edition, Richardson said, "It would impact pitch preparation, team recovery and travel days, accommodation and venue availability, tournament staffing, volunteer and match officials availability, broadcast logistics and very importantly the spectators who in some instances have travelled hours to be at the game."

He said that there is also no guarantee that the reserve day would be free from rain either.

"Up to 1,200 people are on site to deliver a match and everything associated with it including getting it broadcast and a proportion of them are moving around the country so reserve days in the group stage would require a significant uplift in the number of staff, Richardson further stated.

"We have reserve days factored in for the knock-out stages, knowing that over the course of 45 group games we should play the large majority," he added.

"In the last couple of days, we have experienced more than twice the average monthly rainfall for June which is usually the third driest month in the UK. In 2018, there was just 2mm of rain in June but the last 24 hours alone has seen around 100mm fall in the south-east of England," Richardson said.

The forecast for the next few days is not on the bright side which may threaten the upcoming matches to be called off.

Richardson said that match officials, venue team and ground staff jointly work closely to ensure that there is a "best possible opportunity" to play cricket even if it is a reduced-overs game, in the event of inclement weather.

"We also work to keep fans in the stadium, or those travelling to the game, as up-to-date as possible with any information we have, either through public announcements or on our social media channels," he further said.