Reigning champions Australia are looking to bounce back from a 36-run loss to India -- their first defeat of this World Cup. 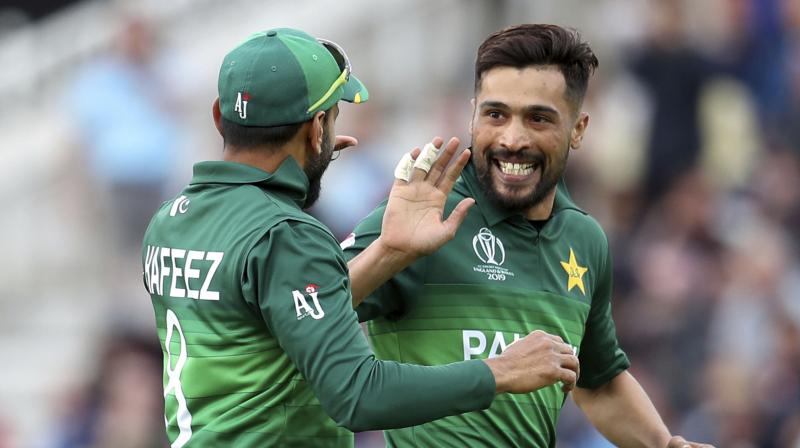 That first over was a maiden and Amir bowled two in a four-over spell in which he conceded a mere 11 runs. (Photo: AP)

Taunton: Australia survived a probing opening spell by Mohammad Amir to reach 76 without loss off 13 overs after being sent in to bat by Pakistan in a World Cup match at Taunton on Wednesday.

Roared in by chants of "Amir, Amir" from the Pakistan fans in the crowd, the left-arm quick was on target right from the first ball of the match, beating Australia captain Aaron Finch's outside edge.

That first over was a maiden and Amir bowled two in a four-over spell in which he conceded a mere 11 runs.

Finch should have been out for 26 in the 13th over when he edged Wahab Riaz, one of three left-arm quicks in the Pakistan side, only for first slip Asif Ali to drop a head-high chance that burst through his hands before going for four.

At the end of the over, Finch was 35 not out and left-hander David Warner 33 not out.

Pakistan captain Sarfaraz Ahmed decided to give his bowlers first use of a green-tinged pitch under overcast skies.

But Shaheen Shah Afridi, drafted in as an extra seamer after Pakistan dropped leg-spinner Shadab Khan, was not as accurate as fellow left-arm quick Amir.
His first two overs cost 24 runs, with Finch pulling a short ball for six and Warner also cashing in with a pulled four when Afridi failed to pitch up.

Reigning champions Australia are looking to bounce back from a 36-run loss to India -- their first defeat of this World Cup -- with Pakistan keen to build on a win over England after their last group match, against Sri Lanka, was washed out.