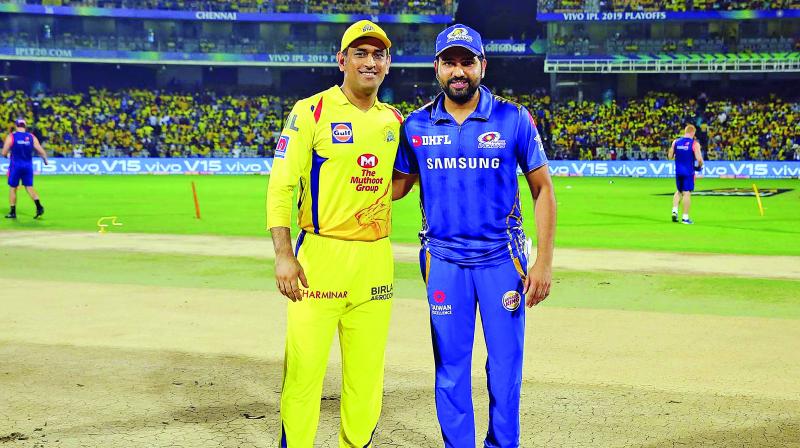 Hyderabad: This is it. After 59 matches, the Summer Ball boils down to the last dance. The dress code is yellow and blue and there are movers and shakers in their Sunday best for the final fling. No virgin nerves there though as both Mumbai Indians and the Chennai Super Kings have been there and done that, thrice over.

Mahendra Singh Dhoni’s Chennai are the defending champions but the Rohit Sharma-led Mumbai have won it the year before. It’s a dogfight when the biggies yearn for a bite of the coveted Cup.

However, it’s the Blues that have rocked the Yellow Submarine through this season, having won all the three contests between the heavyweights, on a canter — a victory by 37 runs at home, a 46-run thump away, followed by supremacy by six wickets in the Qualifier-1 played at Chennai.

Having made the final by playing one game less in the Playoffs — four days ago — Mumbai are relatively fresh too. Meanwhile, Chennai have had to travel to Vizag, grind it out against Delhi in Qualifier-2 on Friday night and then hurry to Hyderabad — they could not even make it to the pre-match press conference scheduled 8.30 pm, owing to delayed arrival.

Dhoni will pick positives out of the toil though. Openers Shane Watson and Faf du Plessis striking a stand of 81 and helping themselves to half-centuries augurs well for his side that boasts of a strong batting line-up. That Dwayne Bravo (2/19), Ravindra Jadeja (2/23), Deepak Chahar (2/28) and Harbhajan Singh (2/31) were among the wickets is a huge plus on the Hyderabad track.

However, it’s Rohit that must be smiling at the sight of the Rajiv Gandhi International Cricket Stadium. His team have a better record and have done remarkably well here, especially while defending low totals. In the 2017 IPL final at the RGICS, they pipped Rising Pune Supergiant by one run on the last ball after managing just 129 for 8 — Dhoni was part of the losing Pune pack.

In a league match against Sunrisers last month, they looked headed for defeat after making a lowly 136 for 7 but stunned everyone by winning the game by a whopping 40 runs. Kieron Pollard had held their innings together with an unbeaten 46.

The RGICS has actually been Pollard’s passport to IPL. It was here that he announced himself to the franchisees with a 14-ball 31 for Trinidad & Tobago against Deccan Chargers in the Champions League T20 tournament 10 years ago. In the following match, he slayed the New South Wales attack comprising Brett Lee, Doug Bollinger, Moises Henriques, Nathan Hauritz, Stuart Clark and Steve Smith with an 18-ball 54 that contained five boundaries and five sixes. T&T win again. The West Indian has become a household name and an integral part of the Mumbai machine since.

On the other hand, Chennai have lost a low-scoring (132 for 5) league match played here this season, by six wickets to the Sunrisers. Hyderabad-bred A.T. Rayudu is the only CSK player who would be most comfortable at the venue. He has in fact been part of the Mumbai side that won the 2017 IPL final here.

Well, Mumbai have had everything going for them. The big names shining, the support cast stepping up to the plate as well. Rohit, Quinton de Kock, Suryakumar Yadav, the pugnacious Pandyas and big man Pollard can be counted upon to raise runs while acute angle men Lasith Malinga and Jasprit Bumrah will once again be in-charge of whipping up wickets.

It remains to be seen which team strikes rhythm and which one faces the music. They’ll be dancing in the stands for sure.