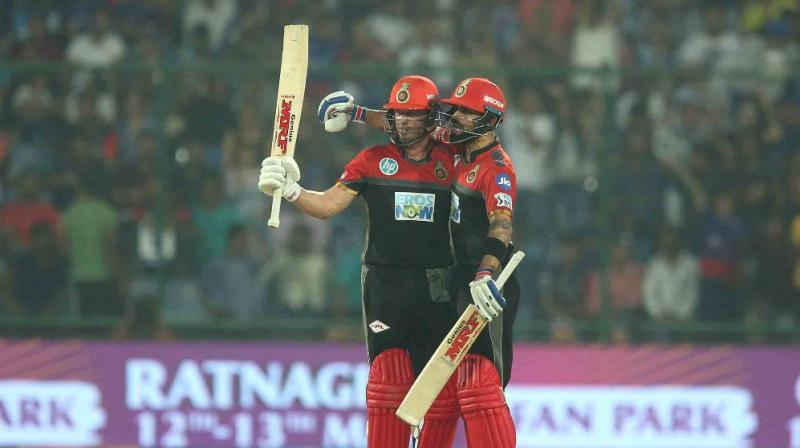 However, Kohli and AB then put up a 118-run partnership to take the visitors back on track.

Despite the fall of wickets at regular intervals, AB de Villiers was standing tall as he stayed till the end to guide the visitors home.

While RCB celebrated a much-needed win, it was a forgettable debut for Nepal’s Sandeep Lamichhane, who got a wicket in his IPL debut.

Apart from Sandeep, Trent Boult got a couple of wickets, whereas Moeen Ali and Mohammad Siraj got one wicket each.

WICKET! Mandeep Singh has been dismissed for an unlucky 13 as RCB lose another wicket.

WICKET! Amit Mishra gets the big fish of Virat Kohli, who departs for 70. This is a much-needed breakthrough for the hosts.

WICKET! Nepal's teenage sensation Sandeep Lamichhhane has just got his first wicket on IPL debut, as Parthiv Patel is struck leg before wicket. Patel, as a result, departs for just six runs.

WICKET! Trent Boult strikes as he sees off Moeen Ali for one run.

Rishab Pant (61) was the saviour for Delhi Daredevils again as the hosts posted a total of 181-4 against Royal Challengers Bangalore in the IPL on Saturday.

Captain Shreyas Iyer (32), too, played a cameo in what was another innings with mixed fortunes for DD.

Yuzvendra Chahal finished his spell with two wickets, whereas Moeen Ali and Mohammad Siraj scalped one wicket each.

Debutant Abhishek Sharma (46) , too contributed some worthy runs as DD finished with a respectable total.

WICKET! Captain Kohli gets his first catch of the match as Mohammad Siraj dismisses Shreyas Iyer for 32.

WICKET! Moeen Ali gets the breakthrough, as he sees off Rishab Pant for 61. AB de Villiers the man at long-on who completes the catch.

FIFTY! Rishab Pant gets to his seventh IPL fifty as he continues his fine form in this tournament. Can he take the hosts to 200?

CLEAN BOWLED! Chahal is at it again, as he clean bowls Jason Roy, who departs after scoring 12 runs. Has DD's collapse already begun?

RCB have won the toss and have elected to bowl.

Both teams have made changes. For DD, Nepal's Sandeep Lamichhane makes his debut, whereas Junior Dala and Abhishek Sharma are also part of the playing XI.

RCB have made one change, bringing in Sarfaraz Khan in place of Manan Vohra.

Here is how the teams lineup:

Both teams have only managed three wins so far in the tournament.

RCB and DD are placed seventh and eighth respectively.

This could all but be RCB’s game going by the statistics, with Virat Kohli’s side having won 13 out of 20 matches against Shreyas Iyer’s men. Eve in New Delhi, the situations have favoured them. While RCB have won five matches at the Feroz Shah Kotla, DD have only a couple of wins against RCB at their home turf.

DD’s recent heart-breaking performance came against table-toppers Sunrisers Hyderabad, who romped home with a nine-wicket win, despite a 63-ball-128 by in-form Rishab Pant.

Meanwhile, RCB’s batting worries continued in their recent match against SRH as they fell short to Kane Williamson’s men by five runs, despite bowling out them for 146.

The winner in this match would have a slight chance of quailifying, whereas the loser’s stay in the tournament would all but be over.

The match is scheduled to start at 8 PM IST on Saturday, May 12th.

The match will take place at the Feroz Shah Kotla, New Delhi.